Basketball in 3-Way Tie for 1st After Win Over Tigers

On Friday night, the Jesuit basketball team (7-2, 26-4) was on fire to clinch their fourth straight district win over Holy Cross. The Jays shot 41 percent from behind the arc, amassing nine three pointers in the 67-46 victory.

From the opening tip, Jesuit came out with the highest level of confidence to date. An opening bucket by senior Noah Varnado was followed by a dagger 3-pointer by senior Zachary DeBlieux, and the Jays were out front and never looked back. Senior Elijah Morgan led all scorers with 31 points, shooting 50% from the field.

The Jays led 15-4 at the end of the first quarter, thanks to smothering defense. Nick Artigues and Nick Brewster together drew four offensive fouls on Holy Cross players, relentlessly frustrating any of the Tigers’ attempts at the basket.

Varnado posted a double-double with 19 points and 11 rebounds, and Robert McMahon was right behind him with 12 points, going 2 for 3 from 3-point territory.

Finally, the sixth man made a huge difference from the stands. The Jesuit student section, collectively known as “The Gizzard,” was raucous and filled the Holy Cross gym with excitement. 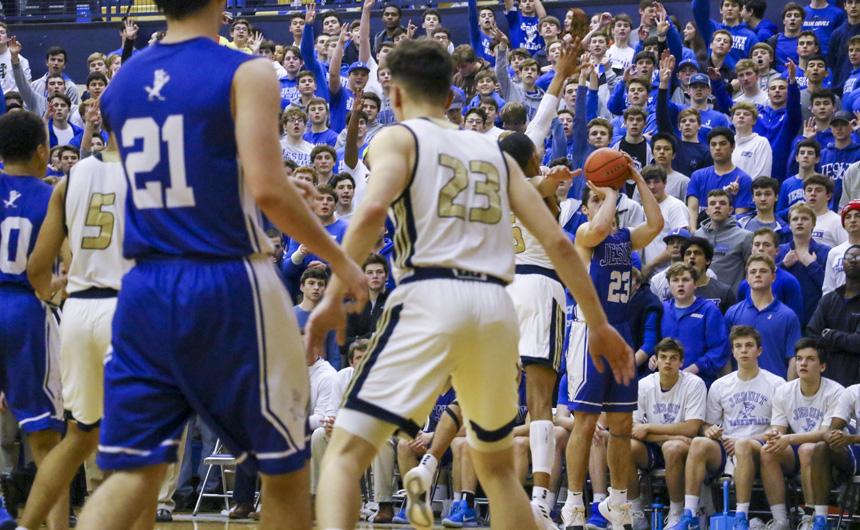 Noah Varnado sets up for an open shot in front “The Gizzard” during Friday night’s spectacular victory at Holy Cross.

The basketball team is now in a 3-way tie for 1st place in district play with Holy Cross and St. Augustine.  They host the Shaw Eagles on Tuesday night at 7 p.m. at home, then face off again at home with district co-leader St. Augustine on Friday.