Relentless Defense Is Key for Road Win at Shaw

A feisty Shaw Eagle squad gave Jesuit all it could handle on Friday, Jan. 11, repeatedly penetrating the lane for points in the paint and creating numeorus Blue Jay turnovers. But Jesuit’s relentless ball pressure eventually sapped the Eagles legs, and the Jays pulled away for the victory in the fourth quarter for a 61-57 road win.

Senior point guard Elijah Morgan provided most of the offense in the first half, scoring 16 points, including four three-pointers, as the Jays took a 31-25 lead into the locker room.

Shaw whittled the lead down to four by the end of the third quarter, closing to 42-38. Then in the fourth, Jesuit’s strategy of making Shaw’s guards work for every inch of the court started to pay dividends. The Eagles’ legs started to tire, and it showed at the free throw line, where Shaw was 1-9 for the final frame.

Jesuit, meanwhile, broke the game open midway through the quarter. A big steal and lay-up by junior guard Kyle Haupt got things going, extending the Jays lead to 44-38. A three-pointer by Morgan then increased the lead to seven points, and things were seemingly under control.

But the Eagles were able to cut the lead to 48-46 at the 4:20 mark before a trio of seniors sparked a 9-0 run that would put the game out of reach. Forward Robert McMahon converted two lay-ups, guard Freddie Washington drained a three-pointer, and Zach DeBlieux added another bucket to push the lead to 57-46. Shaw closed the gap but their inability to hit free throws prevented them from seriously threatening down the stretch. 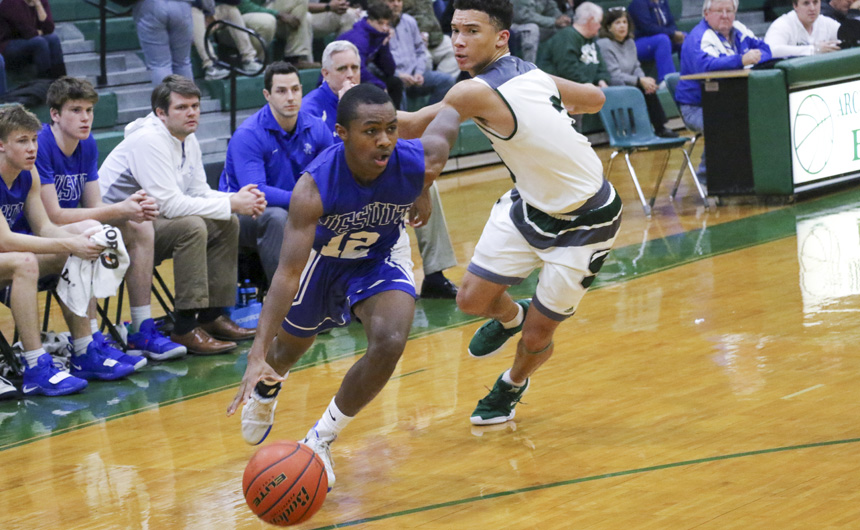 Freddie Washington makes a baseline move past his defender in the Friday night road win at Shaw.

Jesuit (22-3, 3-1) returns to the court for a showdown with district-leading St. Augustine on Tuesday, Jan. 15. Tip-off is scheduled for 7:00 at the Purple Knight gym.