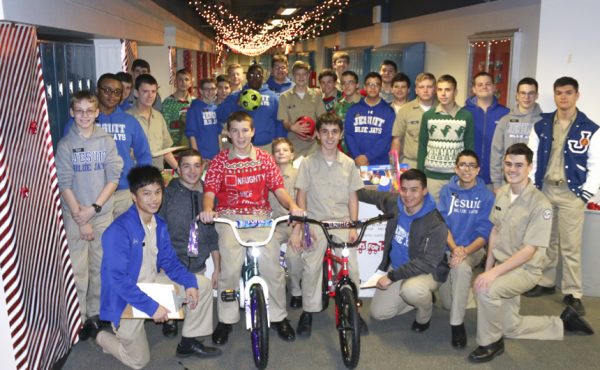 In conjunction with the national U.S. Marine Corps Reserve program, Jesuit’s MCJROTC participated in the annual Toys for Tots drive, holding a homeroom-wide contest to collect as many new, unwrapped gifts as possible.

The two-week long drive ended on Friday, December 14. Jesuit students donated 1,451 toys to be distributed to local agencies serving the underprivileged. This is the second highest total since the drive began. The MCJROTC congratulates to all who donated toys, especially the following homerooms which donated the most toys in each grade level:

Reps from these homerooms should see LtCol. Huete next year to arrange their donut party.

As a class, the pre-freshmen donated the most toys (391).

Founded in 1947, the Marine Toys for Tots program distributes toys to children whose parents are unable to purchase Christmas gifts.