The ongoing preparation for the Thanksgiving Drive brings the entire Jesuit community together for one common purpose—to serve the less fortunate.

On Monday, Nov. 12, community service director Mr. Kevin Murphy ’00 launched this year’s Thanksgiving Drive, a Jesuit New Orleans tradition that has been conducted since at least 1927 when the Sodality placed boxes in each classroom to collect food items for the city’s poor. 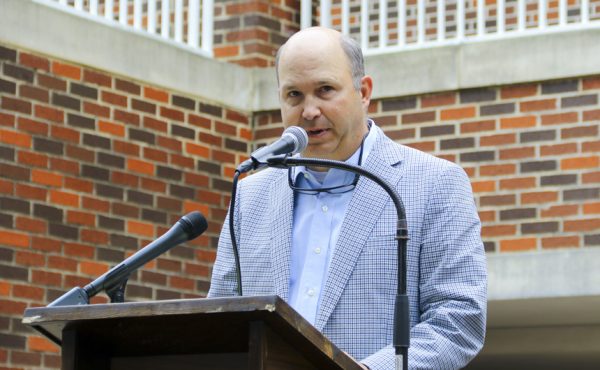 “Next Wednesday (Nov. 21), between you and the alumni, Jesuit will provide Thanksgiving baskets to roughly 500 families in New Orleans,” Mr. Murphy told students. “Each of those baskets will have a turkey in it, thanks to the Class of 1983.” Murphy then introduced Dr. Mark Wegmann, co-chair of 1983’s turkey committee.

“What is success?” Wegmann asked during his address. “For different people, it means different things. For some, it’s financial. For others, it’s more spiritual. It always includes family and friends, but most of all, success means happiness. It should also include the things Jesuit has taught us…AMDG, as well as being men for others—that’s how this Turkey Drive got started.”

Nearly 25 years ago, four or five of Wegmann’s classmates joined together and asked, “What can we do to help those less fortunate?” They pieced together a few dollars, bought half a dozen turkeys, and contributed to the drive at Carrollton and Banks. This year the class will provide more than 500 turkeys.

Many students will contribute to the drive by waking up early on the morning of the drive and shopping for groceries at Robért’s. Others will use their transportation and their muscle to deliver these turkeys to the families adopted by their homerooms.

“By doing this, gentlemen, you are being men for others,” Wegmann added. “I urge you to continue to find your path of success, which should include helping your fellow man.”

At the midway point of November, which includes or has already included Open House, the Philelectic Society’s fall musical, and fall sports’ postseason play, Jesuit students are shifting their focus outside the campus walls as their homerooms prepare for the annual Thanksgiving Drive.

Each homeroom is given at least five families for which to collect food items over the next week. Students will bring in canned goods, among other items, and collect the funds necessary to complete the baskets with perishable items such as eggs, bread, and milk. The drive will culminate when students spend two days shopping for, packing, and delivering these baskets to hundreds of families in need.

Alumni adopt nearly 180 families, reaching out classmate-to-classmate to raise funds for food items. Some classes even go above and beyond by adopting multiple families as a class project. Alumni also gather on Tuesday, Nov. 20, to sort the food purchased with alumni donations, and many return to the Student Commons on Wednesday, Nov. 21, to distribute the food to families that pick up their baskets from Jesuit and to deliver to those who cannot make the trip to school.

Accompanying Wegmann at Morning Assembly were classmates Malcolm Schwarzenbach, Stan Gelpi, co-chair Louis Schott, and René Alvarez. Each year the 1983 committee appeals to their classmates to provide the funds not only to purchase the turkeys for that year, but also to grow an endowment to eventually fully fund the turkey drive. 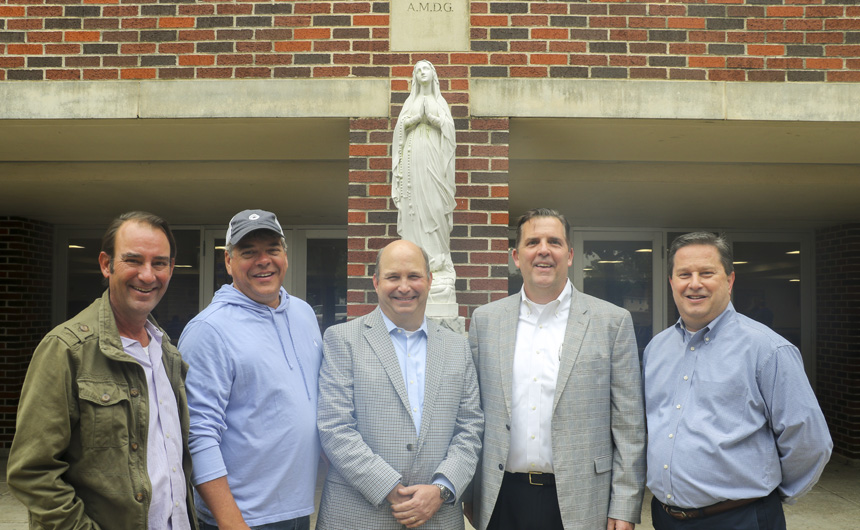