This past week Jesuit’s MCJROTC had the privilege to celebrate not one but two important occasions for the U.S. armed services.

With great pride and reverence Jesuit’s MCJROTC celebrated the United States Marine Corps’ 243rd birthday on Thursday, Nov. 8. Since Nov. 1, 1921, the Marine Corps birthday celebration has served, by the order of then-Commandant Gen. John A. LeJuene, as a reminder of the accomplishments of the Corps’ service. Each year, Marines across the globe gather to commemorate the Corps’ founding with a traditional birthday cake-cutting celebration. Jesuit’s MCJROTC acknowledges this tradition with its own ceremony for friends and family of cadets.

View the Photo Gallery of the MCJROTC Marine Corps Birthday 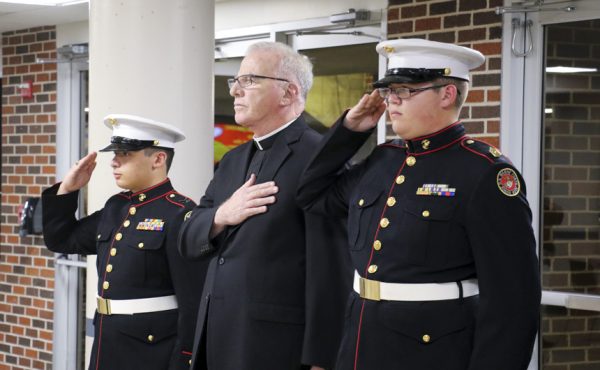 Fr. Shaughnessy was commissioned in 1994 and has since served as a chaplain with the Navy, Marine Corps, and Army. In his twenty years of active service, he was assigned to a variety of commands, including Marine Corps Base in Camp Butler Japan, the Third Battalion Fourth Marines, the USS Enterprise, Naval Air Station Pearl Harbor, the USS Belleau Wood, the 11th Marine Expeditionary Unit, the School of Infantry in Camp Pendleton, the Army’s First Brigade, First Armored Division, the Third Marine Air Wing, and the Naval Expeditionary base at Little Creek, Virginia. He retired from the United States Navy in 2014 with the rank of Commander.  He currently teaches theology at Jesuit.

After the colors were presented by the Color Guard, the Battalion Commander, Cadet LtCol August Huete, cut the cake with an NCO (non-commissioned officer) sword. As is tradition, the first piece was given to the guest of honor, with the second and third pieces going to the oldest and youngest cadets present, Cadet Michael Scott (senior) and Cadet Private C.J. Evans (pre-freshman) respectively. 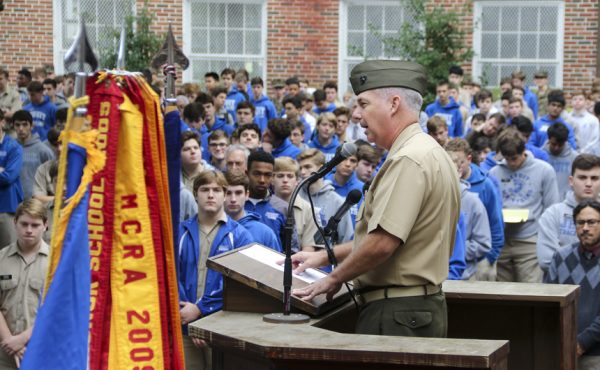 Only four days later on Monday, Nov. 12, students and faculty were treated to a special presentation by the MCJROTC program at Morning Assembly, celebrating Veterans Day.

Watch the Video of the Veterans Day Morning Assembly

With the MCJROTC band playing “Viva La Vida” and the MCJROTC color guard standing at attention, LtCol Tim Huete ’76 began the assembly by explaining that Nov. 11, 2018, marked the 100th anniversary of the end of the Great War—the War to End All Wars—World War I. After 1954, it has come to be a day to honor all veterans who served in our country’s military and fought in our nation’s wars. He encouraged everyone to take a moment to acknowledge the selfless service and bravery of these veterans, because in the words of Jesus, “Greater love hath no man than this, that a man lay down his life for his friends.”

LtCol Huete then took a moment to recognize those members of the Jesuit community who have served, and continue to serve, in our nations armed forces:

In conclusion, LtCol Huete led the assembly in praying one of his favorite prayers—St. Ignatius’ “Prayer for Generosity.” “It is a simple one, and very short,” he explained  “but there is so much contained in these few words. Attributed to a soldier, it asks for our Lord’s help in our struggle to achieve true humility and tells us how to serve others with a truly humble and selfless heart – just like many of the veterans whom we honor today.”

After prayer, the MCJROTC band played the national anthem as the other cadets presented the colors.