Football Goes to the Wire with Destrehan, Falls 28-23

In a hard-fought non-district battle, the Jesuit football team fell to the Wildcats of Destrehan, 28-23, on Friday night at Tad Gormley. The Wildcats (8-1) scored two 60-yard touchdowns in the third quarter, but the Blue Jays (5-4, 3-2) mounted a serious comeback in the fourth quarter with two red-zone scores.

That comeback effort ended when Max Scheurich‘s onside kick with 1:21 to play was recovered by Destrehan. The Wildcats, who led by four at the half and finished with a five-point win, put up more points (28) than any other team the Jesuit defense has faced this season.

Despite its tough result, the football game featured two celebrations, one before the game and one at halftime. For Senior Night, the team honored the Class of 2019 players and their parents before the coin toss. At halftime, the student council presented the 2018 Homecoming Court and crowned this year’s queen. 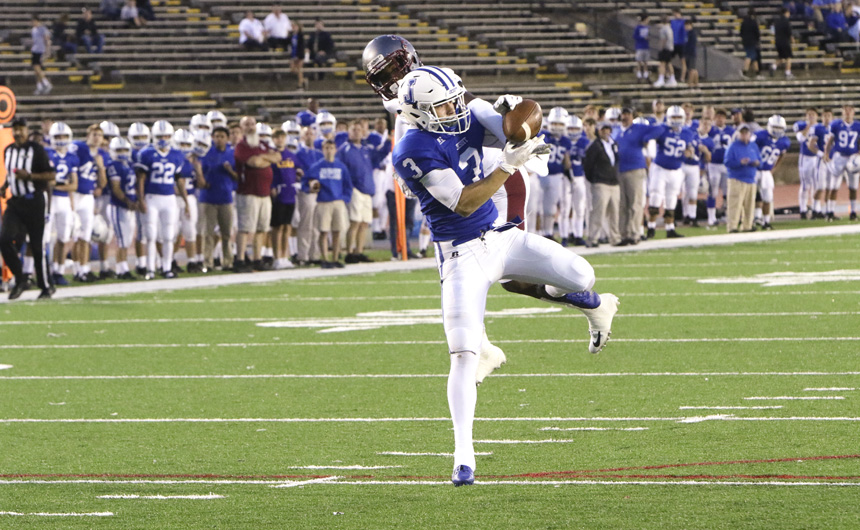 Receiver Noah Varnado comes down with a huge catch on a long pass play that leads to a Willie Robinson touchdown run.

View the Photo Gallery of the Jesuit-Destrehan Football Game

“I’m really proud of our guys,” head football coach Mark Songy said. “It looked like we were completely out of it at 28-10 and we just kept fighting back. I’ve got to tell you, I’m not surprised by that with the way we practice, and our thought process and the way we work. We’ve got a great group of kids.”

For its final game of the regular season, Jesuit faces Brother Martin (5-4, 2-3) at Tad Gormley with kickoff set for 7:00 p.m. The Jays look to guarantee themselves a winning season with a victory over the Crusaders.