WWL, NOLA.com Declare JHS vs. DHS Game of the Week 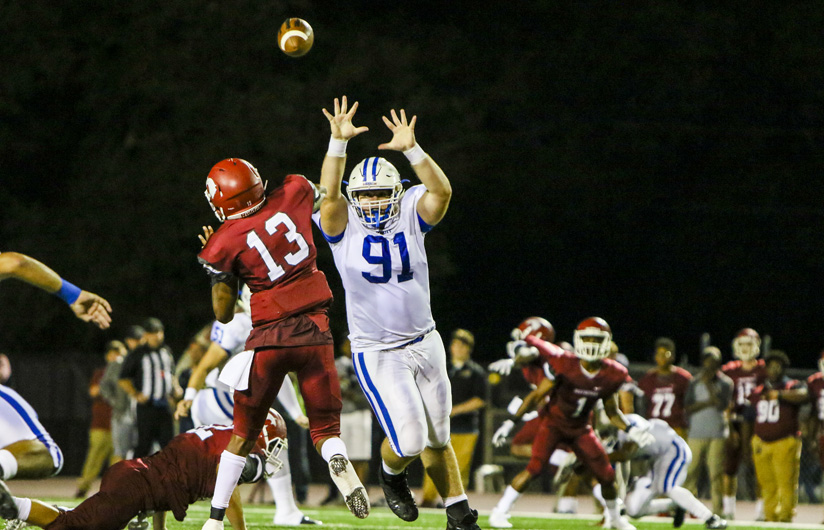 WWL will carry live play-by-play for the Destrehan-Jesuit game this Friday night. The matchup has been declared the game of the week for the Allstate Sugar Bowl Prep Football Roundup and can be heard on WWL 105.3HD2 FM. Kickoff is set for 6:00 p.m, an hour before the usual start time.

With playoffs looming, Friday’s matchup will be a huge factor in determining seeding for both teams. Unofficially, both teams sit in 5th place in the standings after last week’s wins. Destrehan is in 5th place in 5A just behind John Ehret, while Jesuit (5-3) is also in 5th place in Division I, unofficially .04 points ahead of Evangel.

Destrehan (7-1) defeated H.L. Bourgeois last week, 48-0.  The Wildcats, led by running back John Emery, are averaging 48 points per game.  However, Jesuit’s defense has been stifling this year, reminiscent of the Blue Jay defense that led Jesuit to a Division I title in 2014.

The Wildcats and Blue Jays will square off at Tad Gormley Stadium in New Orleans. “The Esquire” Brad Luminais will provide live play-by-play coverage, with Joey Bruett doing color, on 105.3HD2 FM and on the WWL app.

Jesuit fans actually have two sources of broadcast for the game, as NOLA.com will provide live audio for its Prep Game of the Week.

Live audio by Jim Derry: Jesuit vs. Destrehan to be broadcast Friday

To listen to the NOLA.com live audio, click play on the stream within the link above.