Jays Outfly Eagles in Battle of the Birds, 28-0

Don’t look now, but the Jesuit football team is above .500 in both overall and Catholic League records. The Blue Jays now have some breathing room in their quest to finish with a winning record. That sense of breathing room was felt by Jays in the halftime locker room, after they flew past Shaw behind the hands of Noah Varnado and the legs of Brayton Whittington to shut out their district rivals, 28-0. Friday afternoon’s “Battle of the Birds” saw the Jays’ defense hold Shaw to just 95 yards.

Whittington and Varnado, who each scored two touchdowns in the first half, complemented each other on the Blue Jay’s first scoring drive. After the offense was provided excellent field position at midfield, the Jays quickly found themselves going for it on fourth-and-9. Varnado caught an open-field pass from Robert McMahon and raced all the way to the 2-yard line. Whittington then took a hand-off in I-formation and powered through the tackles for an easy score. 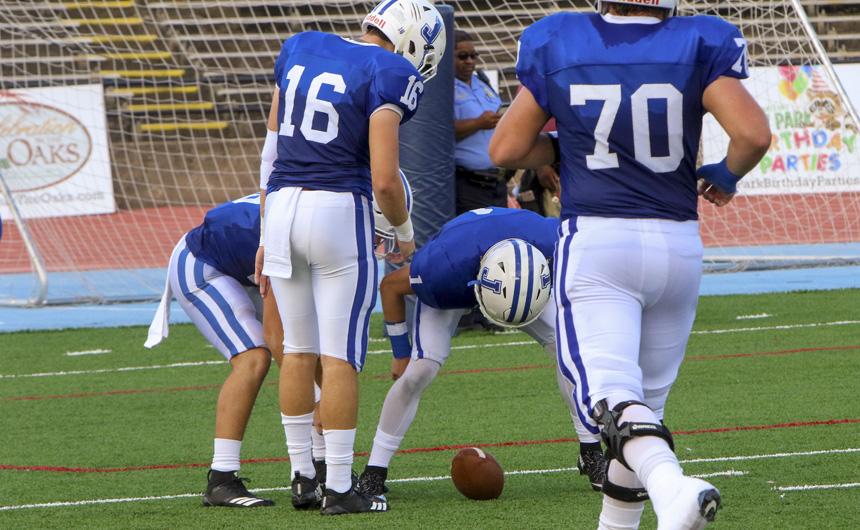 Cornerback Vincent Loguidice downs Max Scheurich’s punt that came all the way from the opposite 30-yard line. The 69-yard punt landed around the Shaw 20-yard line and rolled perfectly to the 1.

View the Photo Gallery from the Jesuit-Shaw Football Game

Matthew Sauviac and Paxton Dinwiddie combined forces to pick up a big sack that ended the third quarter and backed the Eagles closer to their end zone. Head football coach Mark Songy discussed the stout defense, which finished with three sacks and nine tackles for a loss.

“We feel like we have a pretty good defensive front. The back end is playing pretty well, too,” Coach Songy said. “I was glad to be able to pull some of those guys in the second half and let some of our younger guys play.”

The Homecoming Court presentations and Senior Night are Friday, Oct. 26. The Blue Jays, ranked No. 9 in the New Orleans Advocate Large School Super 10 polls, will face No. 6 Destrehan (7-1) in a non-district contest. The Senior Night game will take place at Tad Gormley at 6:00 p.m.