In last year’s game between Rummel and Jesuit, the crowd at Yulman Stadium saw the Raiders rally from an 11-point 4th-quarter deficit to defeat the Blue Jays, 22-21. On Saturday night the Raiders came out firing early in their homecoming game at Joe Yenni Stadium, scoring on the opening drive and keeping the lead to the final horn. Their 20-7 victory keeps the Raiders undefeated in the Catholic League, a feat matched only by John Curtis.

Curtis entered the weekend ranked No. 1 in The New Orleans Advocate Super 10 for large schools, with Rummel ranked seventh, Jesuit ninth, and St. Augustine 10th. Brother Martin was eighth in the Super 10 and eventually lost to Holy Cross on Friday at Tad Gormley. Now, the Catholic League standings for Week 8 are as follows:

The Blue Jays have been very physical over the course of the season, especially in dealing with teams with more talent or speed. The defense still has yet to allow a 30-point game. John Curtis, who beat the Jays 23-0, scored 58 on St. Augustine and 45 on Brother Martin. Mistakes, however, continue to plague Jesuit on both sides of the ball; and every team in the Catholic League will work this week to limit mistakes for the final stretch. Three games remain, and they are all crucial. 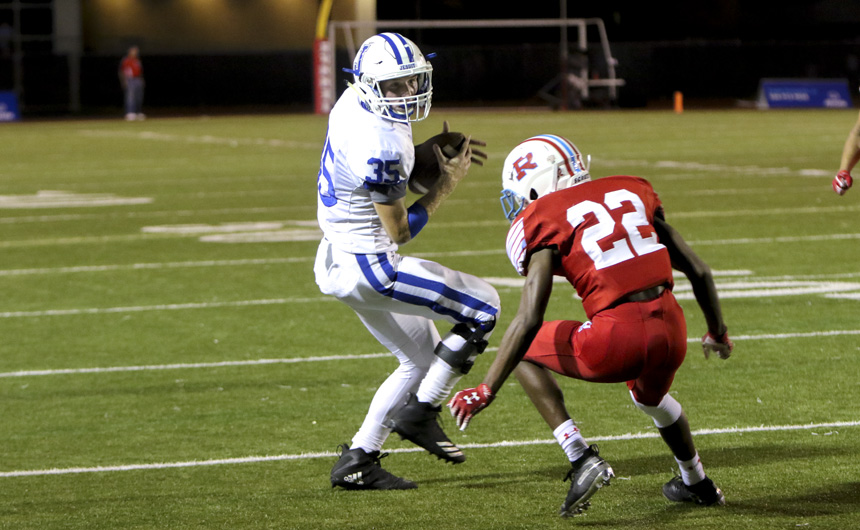 View the Photo Gallery from the Jesuit-Rummel Football Game

“They haven’t lost heart,” said Coach Songy about his players. “In fact, they’re more energized than ever…with the idea that this is a long season with plenty of opportunities. The key to everything is simply finding a way to get better through practice. I continue to have full confidence that we will compete and make great things happen.”

“This is the Catholic League, known for great players and coaches and teams that know each other very well. Staffs work hard, as always, to create opportunities to exploit their opponents. These opportunities are difficult to find, mostly due to great coaching and preparation. Our staff is no different.”

It’s time for the Battle of the Birds at Tad Gormley Stadium! The Blue Jays return to action Friday at 3:30 p.m. against the Shaw Eagles at Gormley.