The Golden Football trophy is back at Carrollton and Banks.

By a score of 28-7, Jesuit football won its 99th meeting against Holy Cross on Friday night at Tad Gormley Stadium to secure the 2018 Great American Rivalry Series. The Blue Jays (4-1, 2-0) snagged their fourth consecutive victory in front of approximately 15,000 people who came to witness the historic district rivalry. Jesuit improved its lead in the series that started in 1922 to 57-40-1.

The Blue Jay defensive line arrived to the challenge as it has all season; and while senior Perry Ganci once again led the way, his sturdy counterparts Owen Melville (senior) and Sonny Hazard (junior) showed their strength as the defense held the Tigers to just 28 yards rushing and 104 passing. Together, the trio recorded 13 tackles and five sacks with Melville responsible for two sacks that pushed Holy Cross back 23 total yards. Player of the Game Perry Ganci was certainly deserving of the MVP award, but even he knows what served as the play of the game.

Without a doubt, it was Luke Besh’s 93-yard kickoff return for a touchdown that opened the second half, provided the game’s first score, and created breathing room for the Jays to finish what was clearly an overall team win.

The final Jesuit touchdown, and last score of the game, started on the ground but finished in the air as senior tailback Willie Robinson ran 15 yards along the sideline and flew across the goal line like his life depended on it. Robinson’s will to score was a reflection of Jesuit’s determination throughout the entirety of the district contest. 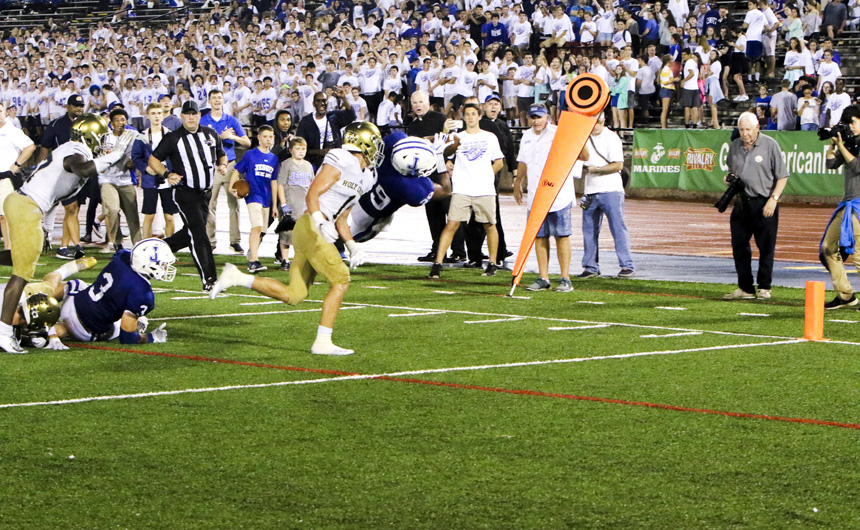 Senior running back Willie Robinson dives into the end zone for a 15-yard rushing touchdown, the final score of Jesuit’s 28-7 Rivalry Game victory.

View the Photo Gallery from the Jesuit-Holy Cross Football Game

View the Photo Gallery from the Rivalry Tailgate, Parade, and On-Field Ceremonies 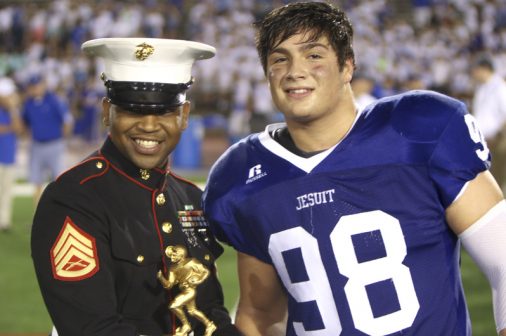 Perry Ganci, who was selected by the Great American Rivalry as the game’s MVP, explained how well the defense played, saying, “It was a great game plan from the coaches. We reduced our mistakes, so we were able to show how great our defense was. The offense showed out in the second half, and we just did the job.”

“When you have a strong senior class, and I’m not just talking about football players, the spirit of the school is high,” head football coach Mark Songy said humbly after the big win. “We’re so privileged to play in front of students and fans that love what we do. It’s such a pleasure, and that’s why I work here.”