“There can be no joy of the fall without the brutal heat of June, July, and August,” famous sports writer Wright Thompson once argued.

The Jesuit football team took the heat on Thursday night, falling to home-team Warren Easton at Tad Gormley Stadium. The 27-14 season-opening defeat may sting for the Blue Jays, but their never-quit attitude was evident against a talented Eagle team that finished 10-3 last season.

When Easton took a 14-0 lead before the first quarter horn, Jesuit’s Willie Robinson slipped through the holes just four minutes into the second quarter and spun into the end zone. Two minutes later when Easton scored again, Jesuit’s Noah Varnado found the pylon on a 24-yard pass from quarterback Robert McMahon and kept the Jays within a score at the half. This back-and-forth mentality by the offense was comforting for Blue Jay fans. And even after giving up 27 points, the defense clearly improved from last year’s opener when it surrendered 40 to the Eagles. 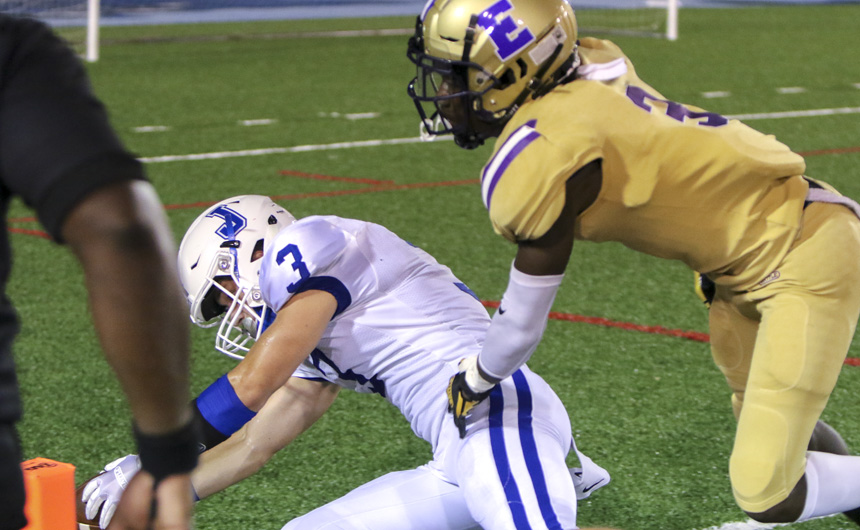 Senior wide receiver Noah Varnado reaches the ball out, crosses the pylon, and scores Jesuit’s second and final touchdown to make it a one-possession game.

“We’re still making a few mistakes that really talented teams will exploit,” Coach Songy said after the game. “I’m still really proud of how hard we fought, and I’m not surprised by the result. This is a better team than we faced last week, so we’ll continue to expect a good fight from teams moving forward.”