Benefactors in the Ignatian Circle, Jesuit’s top donor group, gathered in City Park at the Pavilion of the Two Sisters for a special brunch on Sunday, August 26. The morning reception featured a brief program, which included special recognition for Jesuit volunteers, a presentation from a current Blue Jay, and words of gratitude by Jesuit president Fr. Christopher Fronk, S.J.

Tom Bagwill, Jesuit’s director of institutional advancement, began the program by recognizing volunteers whose efforts have been significant in advancing Jesuit’s mission. Each received a plaque from Jesuit president Fr. Christopher Fronk, S.J. Lori Frischhertz received recognition for her work as the 2017 chair of Celebration, Jesuit’s auction and gala. Next, Anne Black was thanked for her efforts as 2018 chair of the Blue Jay Bazaar. The 2017-2018 PAG chairman René Alvarez ’83 was recognized for his leadership in the Parents’ Annual Giving drive, and the 2017-2018 AGD chairman John Zollinger ’85, although unable to be present for the reception, was also thanked for his service to the Alumni Giving drive. Together, this team of dedicated volunteers (and the hundreds of volunteers who are essential to their efforts) help provide for the resources that keep Jesuit affordable and thriving in its mission. 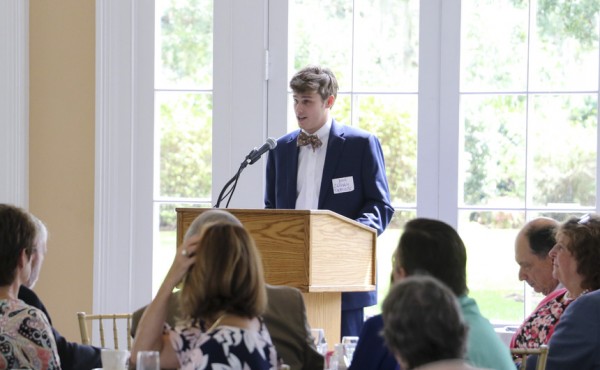 Senior Zachary DeBlieux relates his experience of learning and growing at Jesuit.

A new feature of the program was a presentation by current senior Zachary DeBlieux. He was introduced by Jeremy Reuther, who, in addition to being Jesuit’s communications director, also teaches DeBlieux in a theology elective course and provided colorful classroom anecdotes as an introduction.  DeBlieux spoke of his formation at Jesuit, which was characterized in his early years by living in the shadow of a high-achieving older brother. Now that Zachary is a senior, he sees all the ways that the Jesuit faculty has helped shape his character through his involvement in athletics, Sodality, and the service project program.

Fr. Christopher Fronk, S.J., concluded the program with his own words about Jesuit’s future. “We are a very good school,” Fr. Fronk said, “but we cannot rest on our laurels. We always need to be thinking about how to get better.” He highlighted the recent conclusion of the classroom renovation project in which every classroom on Jesuit’s campus has been renovated to meet the needs of today’s students. He also spoke about improvements made to the academic program by faculty who participated in a summer institute to revise the curriculum. With these pieces of the puzzle in place, Fr. Fronk related his vision for these tools to be used to advance the mission, to form men of faith and men for others who will be leaders for the community and for the world.