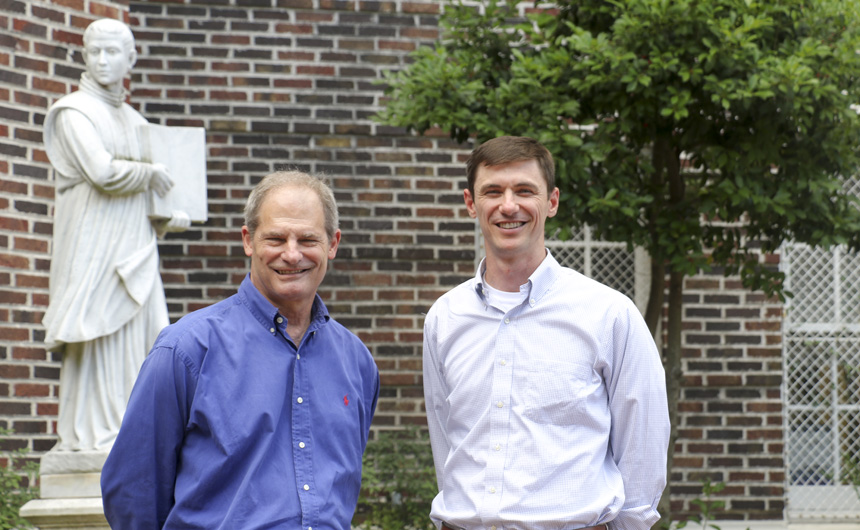 The honorees for 2018 Profile of an Ignatian Educator Award are Bob Roso and Kevin Murphy ’00.

Two Jesuit High School teachers were recently honored as recipients of the 2018 Profile of a Jesuit Teacher Award, an annual recognition of faculty excellence during the school year.

This year’s recipients were social studies teacher Kevin Murphy ’00 and English teacher Bob Roso whose profiles below provide a glimpse into why these faculty members were nominated and selected for this year’s honor.

Teachers are nominated by their colleagues against the standard of being Open to Growth, Religious, Loving, Intellectually Competent, Professionally Competent, and Committed to Justice. In addition to a commemorative plaque, each teacher this year received $5,000. 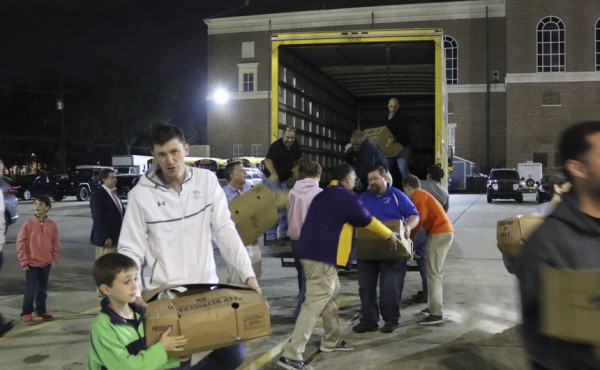 Kevin Murphy ’00, with some assistance from his son Brennan, helps the Class of ’83 unload the turkeys for the annual Thanksgiving Drive.

In his five years at Jesuit, Kevin Murphy has been a model Ignatian educator. As a teacher of geography and Louisiana history, Kevin keeps his students engaged by incorporating creative activities and relating course material to relevant topics in his students’ lives. “Fair,” “kind,” and “intelligent” are among the many adjectives students have used to describe Kevin in the classroom. Combine these traits with a warm, honest rapport, and Kevin’s classroom becomes a welcoming environment for Jesuit’s newest Blue Jays.

As Jesuit’s service project director, Kevin works tirelessly to ensure our students benefit from the tremendous opportunity God has given them to show love to those less fortunate. He visits many and participates in several summer service camps to be sure first-hand that our students’ experience reflects the school’s mission. In doing so, he proves himself to be a quality role model and a true Man for Others.

As a clearing house for service opportunities as they arise in our community, Kevin has been able to offer our underclassmen a chance to experience self-sacrifice first hand. And, of course, Kevin’s diligent coordination each year of Jesuit’s Thanksgiving Drive is one reason so many consider the day before Thanksgiving the best day of the year.

Anytime a need arises – whether it be helping those impacted by last year’s tornado devastation in New Orleans East or helping to organize a coat drive for the Harry Tompson Center – Kevin takes on the responsibility of finding aid, clothing, food, and cash donations. As witnesses to Kevin’s good work, dedication, and compassion, Jesuit’s students are witnesses to a man of genuine service to others.

Additionally, Kevin somehow finds time to coach the 8th grade basketball team where he has gained the respect of his players and serves again as a great role model and leader. Kevin Murphy epitomizes a Jesuit educator and is deserving of this year’s Profile Award.

Bob Roso’s 16 years as an English teacher at Jesuit have been distinguished by his passion for his subject matter, his desire to grow in the classroom, and his determination to see his students become the best they can be.

Bob sets high standards. But if he is demanding on his students, he is doubly demanding on himself, for he knows that anything less would be shortchanging his students. So his challenging lessons are complemented with an abundance of time outside class for student assistance. 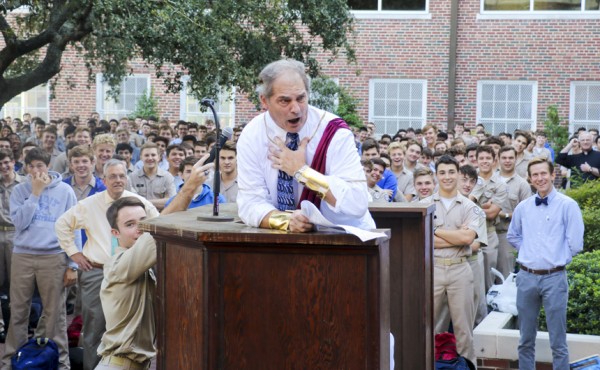 Bob Roso shares his love for things theatrical by playing Julius Caesar for the opening skit of Homecoming Week at morning assembly.

Bob approaches each school year with a hunger to discover new methods of teaching. This openness to growth along with his love of the material inspires students not only to absorb content but also to think independently. A swift-moving figure in the hallway, Bob does not hesitate to stop a colleague to share his excitement about his students’ accomplishments.

Bob brings the same passion and energy from the classroom to his involvement with the sophomore service days and service trips to Nicaragua and Peru. His fervor for manual labor may at first be startling to students, but soon they are modeling his determination and energy to get the job done. The shared physical arduousness of student and teacher in service to others certainly has enhanced the faith lives of many students.

Bob’s influence also extends to his involvement in co-curricular activities, primarily with the Phils and the Movie Critics Club. A champion of the arts, Bob encourages students through the arts to “step outside themselves” to speak up and out for themselves and others.

Perhaps a recent message from a graduating senior to Bob says it best. “Similar to Holden Caulfield’s wish to preserve his childhood, I wish I could take my time in your class and have it placed inside a big glass case and visit it over and over and over again. I’ll carry with me every pleasurable moment I had simply sitting in your classroom. I won’t be forgetting you and your impact on me any time soon.” Congratulations to Bob Roso for exemplifying the Profile of a Jesuit Teacher.