The regular season for the Jesuit baseball team ended with a loss to Brother Martin (BM) after a long wait caused by a rained-out, postponed Game 2. Now, the Blue Jays are hoping to extend their season into the month of May by winning its first playoff series against the Shaw Eagles. (Click here for game details.)

This past weekend, the Jays celebrated Senior Night on April 20 at John Ryan Stadium. Jesuit (19-13) split its district series against Brother Martin after falling in Game 2, 5-1. The Blue Jays had won 4-0 in the series opener that took place two Fridays before, on April 13.

View the Photo Gallery from the Jesuit-BM District Series

View the Photo Gallery from Senior Night on Friday, April 20

Before and After the Stretch
Game 2: Jesuit 1, Br. Martin 5 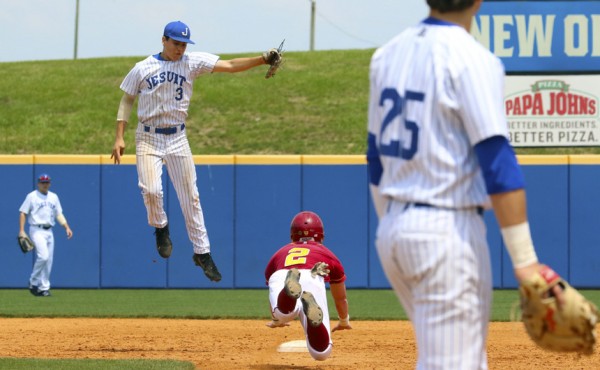 Seth Dardar jumps up to catch a ball thrown to second.

Jesuit suffered a 5-1 loss to the Brother Martin Crusaders on Saturday at UNO’s Maestri Field.

The Blue Jays jumped out to a 1-0 lead in the top of the 2nd, but the Crusaders quickly matched the Jays with a run in the 3rd. In a battle to take a lead before the “5th-inning Stretch,” the Crusaders then tacked on a pair of runs in the 4th. The stretch would not break their focus as they added another pair of runs in the bottom of the 5th. Jesuit could not tighten the 4-run deficit as Brother Martin held on to win, 5-1.

Jesuit’s sophomore third baseman Will Hellmers continued what has been an impressive district performance, certainly on the field, but especially in the batter’s box. Hellmers captured his 30th and 31st hits of the 2018 season, and he was the only Blue Jay to record multiple base hits in the game. The sophomore scored Jesuit’s only run on a wild pitch in the second inning.

Catcher Parker Serio, reliever Will Moran, and right fielder Zack Casebonne added one hit each in the loss.

Moran relieved starter Christian Hess after the stretch in the bottom of the 5th, when the Jays were down by two. In the 5th, Moran gave up two runs to a streaky group of Crusader batters. He recorded two strikeouts in the final two innings.

Hess (4-2) surrendered three runs on six hits and had one strikeout. The senior finished the Brother Martin series with a 1-1 record, and his Game 1 performance was the most clutch of any Jesuit pitching performance this season. 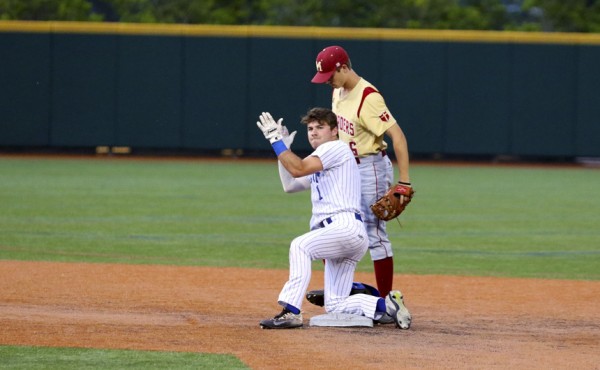 The April drought at John Ryan Stadium was finally nipped in the bud on the often superstitious date of Friday, the 13th. Jesuit’s batters had 11 base hits to Brother Martin’s one-and-only hit of the Game 1 series opener. For the first time all season, the Jays hit five doubles in one inning, the bottom of the 1st, to score four runs. And anyone who missed the first inning missed the only scoring of the game! It ended 4-0 in Jesuit’s favor.

Offensively, the Jays were led by seniors Michael Torry and Matt Alexander. Torry went three for four (.750) on the day with a first-inning double and two singles. Alexander came in the clutch with two RBIs off a first-inning double, and he added a single in the third inning. Sophomore Will Hellmers was responsible for the fourth of five doubles in the exciting first inning. Torry, Alexander, and Hellmers collectively earned six base hits in the game and four first-inning RBIs. The trio-led batting lineup was free to swing for the fences because of Jesuit’s trusty pitcher, Christian Hess.

Throwing all seven innings, the right-handed senior recorded 10 strikeouts and allowed just one base hit in his complete game shutout. It could be argued that Hess pitched the game of the season. Regardless, he certainly pitched the best game of any Jesuit pitcher during the district season.