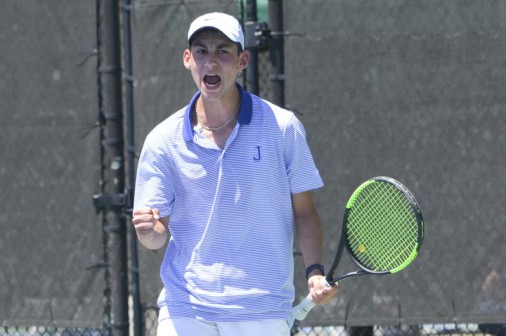 Jojo Sandoz is pumped up during his singles final.

Sophomore Jojo Sandoz’s first trip to the Allstate Sugar Bowl LHSAA Regional Tennis Tournament was a memorable one–for the wrong reason. Then a freshman, Sandoz blazed his way through the first two rounds, but rolled his ankle when he stepped on a ball early in his semifinal match against St. Augustine’s Allen Miller. Sandoz was unable to continue. Brother Martin’s Ethan Bosch went on to win the tournament.

This year, there would be no freak accidents. Sandoz avenged last year’s disappointment with a workmanlike 6-0, 6-4 victory over Bosch in the finals to claim the regional singles championship.

“Jojo really played well,” said coach Travis Smith. “We knew Ethan wouldn’t roll over after the first set. Sure enough, he made a run, but Jojo didn’t panic or doubt himself. He stayed with his game plan and was able close it out.”

All eight Jesuit players who participated in the tournament qualified for next week’s state tournament in Monroe.

Sophomore James Henican will join Sandoz in the singles draw.

Seniors Lee Blosser and Christian Lacoste, who advanced to the semifinals, will lead Jesuit’s three-team doubles contingent. Senior Andrew Ryan and junior Colin Meyer qualified by reaching the quarterfinal round, as did the junior duo of Dex Webster and Cole LaCour.

State begins Monday, April 23 on the campus of the University of Louisiana at Monroe.