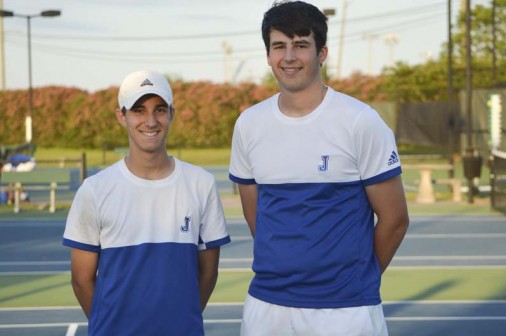 Jesuit’s reign as district tennis champions ended at the hands of Brother Martin on Thursday, April 12, but the Jays didn’t go down without a fight.

In front of a spirited crowd at the UNO Tennis Center, Jesuit was competitive on every line but came up short in their effort to upset the favored Crusaders.

In singles play, the Jays picked up a win on Line 1 where sophomore Jojo Sandoz played nearly flawless tennis to take an 8-4 decision. Sophomore James Henican, senior Christian Lacoste, and sophomore Sid Trouard played well on Lines 2, 3, and 4, but lost by scores of 8-2, 8-4, and 8-6, respectively.

That left Jesuit down 3-1 and needing a sweep in the doubles competition. It was familiar territory for the boys in blue and white, who faced the identical circumstance last year. Unlike last year, though, there would be no happy ending.

This time Brother Martin swept the doubles competition to win the dual meet by a score of 6-1, avenging last year’s 4-3 loss. Lacoste and fellow senior Lee Blosser came close to pulling off a win on Line 1, as did senior Andrew Ryan and junior Colin Meyer on Line 2. Both teams lost by a score 0f 8-6. On Line 3, Brother Martin took an 8-3 win over juniors Cole LaCour and Dex Webster.

Coach Travis Smith was philosophical afterward. “We had two very good high school teams going at it, and Brother Martin was better than we were today. But we’re a resilient group. We’ll just get up off the canvas and come out ready for the next round.”

The Jays won’t have to wait long for that next round. Regional competition begins on Monday, April 16, at the City Park Pepsi Tennis Center.

Sandoz and Henican will represent Jesuit in singles. In doubles, Blosser and Lacoste will go as the team’s top line, with Meyer/Ryan at Line 2 and Webster/LaCour at Line 3.