Another Win on the Road, Another Loss at Home

The last time Jesuit’s baseball team lost an away game was March 15 when the Blue Jays fell 8-4 at Destrehan. It was a non-district contest in the Oubre Memorial tournament, and it happened almost a month ago. That’s the good news.

The not-so-good news is that the last time Jesuit won a game on its own turf was March 23 to complete a district-opening sweep over Shaw. Since the Shaw sweep, the Jays have gone 1-1 in three straight Catholic League series—against Holy Cross, Rummel, and just recently, St. Augustine—with all three wins on the road and, of course, all three losses at John Ryan Stadium.

View the Photo Gallery from the Jesuit-St. Augustine District Series

Two positives can be noted from Jesuit’s clear win-loss pattern throughout district play. The first is obvious in that no coach or player will complain about winning road games, especially when the likelihood of having road playoff games is high. Secondly, in the most recent series against St. Augustine, the Blue Jays proved they will not go down without a fight. 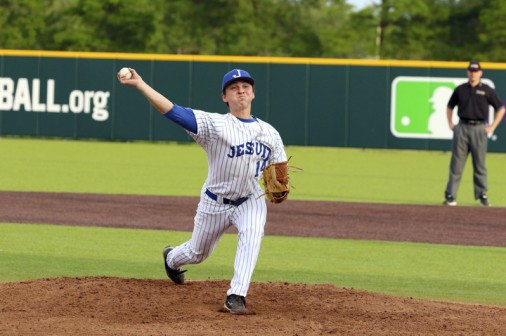 The Jays rebounded from a 11-2 home loss with a 13-4 victory over the Purple Knights at RBI Field. They matched the Knights’ 9-run win with a 9-run win of their own. The victory also brought the Jays two games behind the district leader, John Curtis. 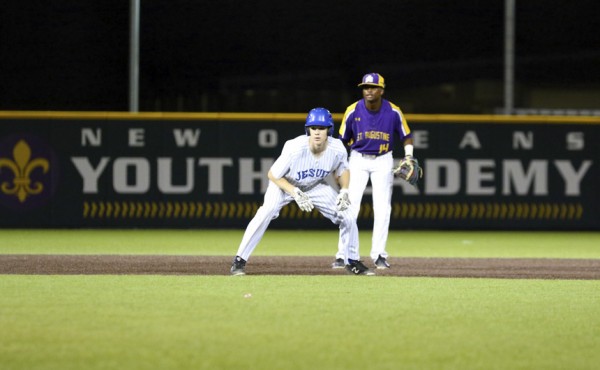 Sophomore Will Hellmers takes a lead after his RBI-double in the seventh inning.

Finally complementing yet another outstanding pitching performance by Christian Hess, the Blue Jays scored nine runs in the top of the seventh inning to defeat the St. Augustine Purple Knights 13-4 this past Friday (April 6). Hess has been hurling excellent games throughout the season for the Jays, but offensive production when he has been on the mound has been limited. That changed with the nine-run outburst.

Hess closed the bottom of the seventh himself for the complete game victory. Will Hellmers provided the offensive spark for the Jays with two RBI-producing doubles in the explosive seventh.

Of course, the final score does not tell the whole story. Game 2 against the Purple Knights was a tough one for the Jays, who scraped together eight hits and jumped out to a 1-0 lead in the first frame, thanks to a line-drive double from sophomore Parker Serio and a sacrifice fly from junior Will Moran. Trailing by a run for three innings, St. Aug finally tied the game, 4-4, in the sixth.

In the seventh, the Jays found the perfect combination of hot hitting and smart bunting. Jesuit’s nine runs started with Hellmers and ended with Hellmers, who finished the game with three hits and three RBIs. Matt Alexander laid down a 2-RBI bunt in the last inning, and Seth Dardar executed a sacrifice bunt that preceded an RBI single from Parker Serio.

Serio had two straight 2-hit performances against the Purple Knights. He was the only Blue Jay to earn four base hits over the two-game stretch.

Hess (3-1) recorded seven strikeouts and captured his third win of the season.

On Tuesday, April 10, the Jays (16-10) head over to Mike Miley Stadium for their second game against district-leading John Curtis. The team lost to the Patriots, 1-0, in a 13-inning Game 1 at John Ryan Stadium. Jesuit looks to continue its away-game win streak in Game 2, with first pitch set for 7:00 p.m. 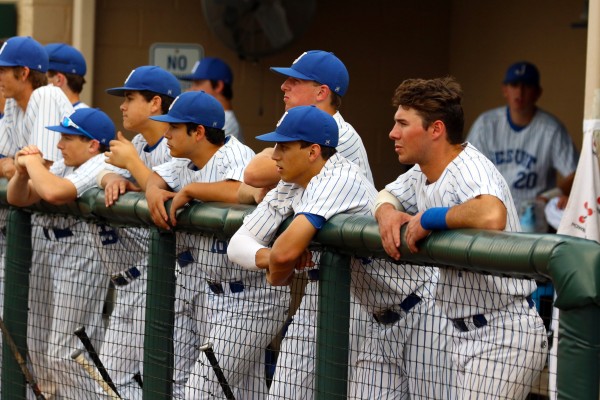 Players lean against the dugout during Tuesday’s loss to the Purple Knights.

When the Knights put up five runs in the third, Jesuit proved their “fight” mentality with two runs in the fourth. This effort would only keep the Knights honest. Finishing the last three with a sequence of 1-4-1 for six total runs, St. Augustine defeated Jesuit 11-2 at John Ryan Stadium.

Pitchers Brian Valigosky and Andrew Cashman recorded two strikeouts each. The defense behind them struggled with three total errors, and the hitting performance was uncharacteristic as the Jays found just three base hits. Two of the three came from catcher Parker Serio, but neither of Serio’s hits earned RBIs.

Jesuit called on two other pitchers, Colin Miller and Zach DeBlieux, in an attempt to freeze the hot streak built up by St. Aug’s batters.

The difference in the game was clear. St. Augustine’s Knights swung the bat and put the ball in play, 15 times to be exact. They forced the Blue Jay defense to make plays every inning, and they were aggressive on and around the bases.

The Knights had five times the number of base hits Jesuit earned (3). It just wasn’t the Jays’ night, neither in the batter’s box nor on the field.