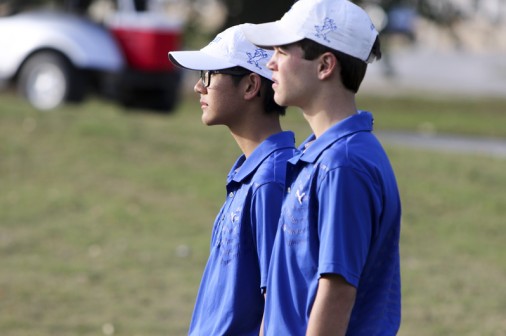 The Jesuit golf team capped off an undefeated regular season after defeating Holy Cross by 11 strokes, 165-176. On the windy Tuesday afternoon at Bayou Oaks, senior co-captain Grayson Glorioso led the way with a smooth 2-over 38. It was his final 9-hole match as a Blue Jay golfer and the team’s last district match of the season.

Junior Britton Khalaf carded a 40 (+4) that put the Jays in good position to win. Junior Jackson Maniscalco came in with the third best Jesuit score, a 5-over 41. Rounding out the top four were seniors Addison Bui and Jack Vollenweider, who each shot a 43 (+7).

Little did Blue Jay golfers know that their closest contest of the spring season would be their first match against the Tigers, when they won by nine at English Turn. The Jays went 5-0 in the fall and 7-0 in the spring. Now 12-0, Jesuit looks ahead to the District Championship on April 16, regionals on April 23, and the two-day state tournament on April 30 and May 1.

“It’s been an absolute honor to be a part of a team with a group of guys who push each other to get better every day,” said Glorioso. “I also want to thank our head coach, Owen Seiler, and the entire coaching staff for giving the team opportunities to play in tournaments that prepare us for another state title. Without Coach Owen, none of this would be possible.”