Tennis Shuts Out Newman, Improves to 4-0 in Local Play 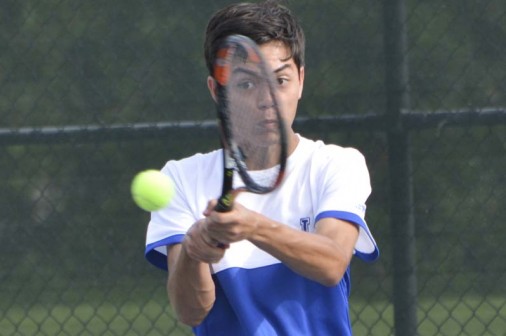 Sophomore Jojo Sandoz closed out an impressive performance by the Jesuit tennis team with an 8-5 win on Line 1 singles, giving the Jays a 7-0 shutout win over the defending LHSAA Division IV state champion Newman Greenies on Tuesday, March 27 at the UNO Tennis Center.

Newman graciously agreed to begin the day’s dual meet with doubles play, which allowed seniors Lee Blosser and Christian Lacoste to get their Line 1 doubles match underway sooner than expected. The duo posted an 8-2 victory in about 45 minutes, enabling Blosser to suit up for a 6:00 p.m. district baseball game with Holy Cross (Blosser is not the only Blue Jay tennis player juggling two seasons at once–Lacoste is headed to nationals as part of Jesuit’s state champion mock trial team).

On Line 2, Sandoz and fellow sophomore James Henican were first off the courts with an 8-1 victory. Senior Andrew Ryan and junior Colin Meyer completed the doubles sweep with an 8-4 win on Line 3.

Next up is an April 5 match against Lusher. Match time is 4:00 p.m. at the UNO Tennis Center.