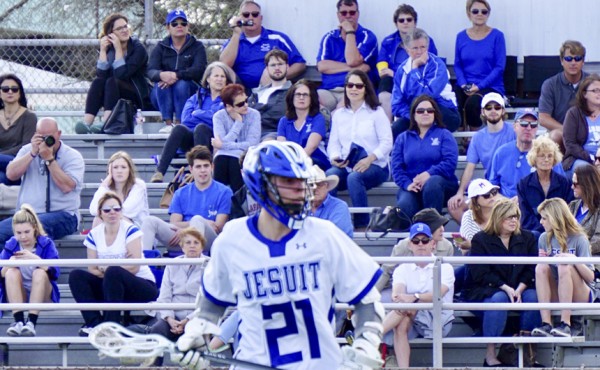 In the last home game of the season at Muss Bertolino, the lacrosse team devoted time to honor the seniors and those who stand (or sit) behind them every step of the way.

In the latest lacrosse action, Kinkaid school from Houston defeated the Blue Jays by a score of 14-5 on Friday night, March 16. The next game for Jesuit lacrosse is at 6:00 p.m. on Wednesday, March 21 against district foe, Newman. The game will be played at Newman’s home field.

The more important part of the Friday evening at Muss Bertolino playground was the team’s Senior Night celebration. Since it was the final home game of the season, the Blue Jay squad honored its seven seniors and their parents for their dedication and support to the lacrosse program.

View the Photo Gallery from the Senior Night Ceremony 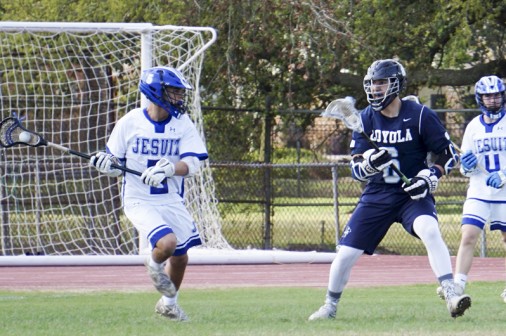 Jesuit defeated Loyola Prep from Shreveport on March 10 by a score of 13-1.

“The team has been improving considerably throughout the season, and that was evident with statement wins against both Brother Martin and Loyola. Those programs consistently put together great teams, and getting back-to-back wins against strong opponents is a true testament to how hard this team has worked to once again be a top team in the state. We have learned this month that if we play our best lacrosse, we can beat any team in the state.”

The game against traditional rival St Paul’s, which was scheduled to follow the Loyola Prep game, has been moved to March 28.

For more information on varsity lacrosse game times, visit the season schedule on the lacrosse page of the Jesuit website. 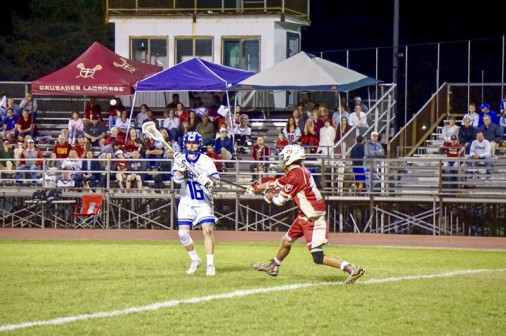 On March 3, the varsity lacrosse team defeated district rival Brother Martin by a score of 10-7.  Each time the Jays scored to take a lead, Brother Martin responded to tie it up. This pattern continued until the teams were all square at 7 goals halfway through the fourth quarter. Over the next 3½ minutes, Jesuit scored three goals (one by Will Simon and two by Ross Champagne) to reach the final outcome of 10-7.

Midfielder Aiden Roberts led the team with three goals. Attackmen Ross Champagne and Elliott Hattier scored two goals each, as did midfielder Will Simon. Jude Donnaud led off the game by scoring his single goal less than 1½ minutes into the game.

Champagne led the team with two assists on the night, while midfielders Clark Romig and Michael Schmidt each added an assist. Long-stick midfielder (LSM) Luke Powers led the team with eight ground-ball pickups, while Romig had seven. Defender Peyton Queyrouze had six ground balls in the game.

Ryan Hamilton had six saves in goal, and the Jays won 14 out of 19 face-offs.