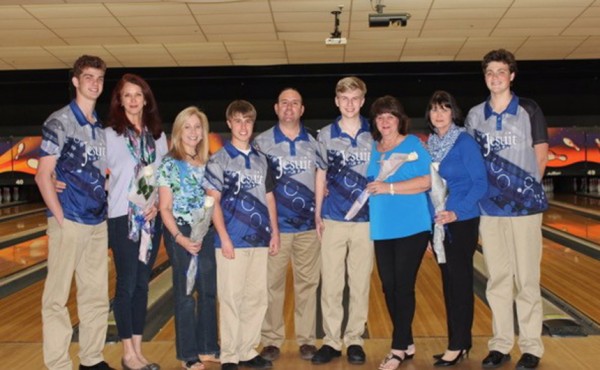 February was a very busy month for the varsity bowling team. On Thursday, Feb. 8, the Jays came out strong against Archbishop Shaw, tying up game one 4-4. They put up an amazing effort in games two and three as junior Jake Stiegler shot 205, senior Alex Barron shot a 213, senior Trent Greco shot 219, and junior Alex O’Neil fired a 245—all finishing with a total series over 540. But the Jay’s high scoring couldn’t stop the Shaw Eagles from charging ahead in games two and three winning with a final score of 8-19.

After the disappointing loss to Shaw, the team rebounded in full force with two back-to-back wins defeating Bonnabel High with a score of 24-3 on Monday, Feb. 19, and defeating Salmen High with a knockout score of 26-1 on Thursday, Feb. 22. The Jays were led in the first match against the Bonnabel Bruins by Alex Barron who bowled a 257 and 209 for a total 641 series. Trent Greco and Alex O’Neil also contributed to the victory each with a game over 200 and series over 520. The Jays then shut out the Salmen Spartans with outstanding performances by Jake Stiegler, Alex O’Neil, and Trent Greco who each bowled a game over 215 and a series over 599.

The team didn’t slow down there. On Monday, Feb. 26, they valiantly bowled against Holy Cross with junior Grant Greco and seniors Jake Stiegler and Trent Greco all finishing with a series over 505. Holy cross took the lead in games one and two, and despite the Jay’s victory in game three, the final score stood in Holy Cross’s favor at 9-18.

However, the Jay’s didn’t let that get them down and bounced back again with another back-to-back victory defeating Holy Rosary with a whopping score of 25-2 on Tuesday, Feb. 27 and defeating Chalmette High with a score of 20-7 on Thursday, March 1. The Jays were led to victory in the first match against the Holy Rosary Bulldogs by freshmen Ben Hunn and seniors Mason French and Alex Barron who each bowled a game over 205. Then in the match against the Chalmette Owls, Trent Greco and Alex Barron secured the second victory by each bowling a game over 200 and finishing with series over 550.

On Monday, March 5, the seniors shone brightly in spite of the 5-22 loss to Brother Martin. Senior Alex Barron led the way bowling a 225 and 201 for a total series of 596. Close behind was senior Gerard Miller who bowled a 212 game and senior Trent Greco who finished with a 525 total series. Junior Jake Stiegler also fought hard bowling a 215 to finish with a 572 total series.

The Blue Jays (7-4) will face Pearl River High this Thursday at Bowling USA in Slidell starting at 3:20 p.m. for their last game of the regular season. Then they will take this momentum to the regional tournament on Monday, March 19, at All Star Lanes in Kenner.