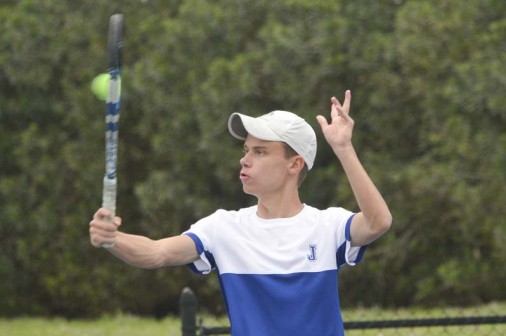 Senior Andrew Ryan won at Line 1 doubles and Line 3 singles to lead Jesuit to a 6-1 win over Ben Franklin on Tuesday, Feb. 27.

Jesuit’s tennis team withstood a strong challenge from a much improved Ben Franklin squad in a dual meet on Tuesday, Feb. 27 at the UNO Tennis Center.

Sophomores Sid Trouard and Pierce Westbrook got the Jays off to a good start, making quick work of their opponents with an 8-0 win at Line 3 doubles.

The other two doubles matches were much more competitive. On Line 1, senior Andrew Ryan and junior Colin Meyer jumped out to a 4-0 lead, but the Falcons stormed back to tie the score at 4-4. Ryan and Meyer then found their groove again, winning the next two games. Up 6-4, the Jays then fell behind 40-15 on Ryan’s serve, but managed to salvage the hold of serve and then closed out the match with a break.

Shortly thereafter, Cole LaCour served out his match on Line 2, where he teamed with fellow junior Dex Webster for an 8-5 win.

Up 3-0 heading into singles play, the Jays only needed one more win to secure the match. Ryan quickly ended any drama with an 8-1 win on Line 3. Sophomores James Henican and Trouard were next off the courts, posting wins of 8-3 and 8-2 on Lines 2 and 4, respectively. Franklin avoided the shutout with an 8-4 win over Jesuit’s Line 1 singles player, sophomore Jojo Sandoz.

“That match was a lot closer than the scores indicated,” said a relieved Coach Travis Smith. “I really think the pressure situations we faced this past weekend in Mobile helped us to persevere out there today.”

Next up for the Jays is a dual meet with Country Day on Thursday, March 1. Match time is 4:00 p.m. at the UNO Tennis Center.