Jays Break Away in Fourth, Extend Win Streak to Four 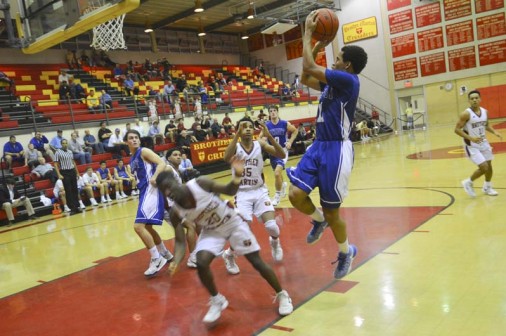 Michael Hull pulls up for a jumper and sends a Brother Martin defender sprawling in the process in the Jays’ 59-54 victory on Friday, Feb. 9.

Jesuit broke open a close game in the fourth quarter, earning their fourth consecutive win and keeping their district title hopes alive with a 59-54 victory at Brother Martin on Friday, Feb. 9.

Both teams played tenacious defense from wire to wire, but in the third quarter the Jays started to pull away. When senior Will Landrieu drained a three-pointer at the 4:10 mark to go up 37-25, Blue Jay fans were starting to feel pretty good.

But there was no quit in the home-standing Crusaders. Brother Martin mounted a furious rally, rattling off 12 straight points to tie the game heading into the fourth quarter.

That’s when Elijah Morgan got hot. The junior guard scored 15 points in the quarter, including three three-pointers. Will Landrieu added five in the frame, including a soul-crushing three-point play off a beautifully executed in-bounds play that effectively put the game out of reach at 56-44 with little over a minute to play.

Morgan led all scorers with 22 points. Landrieu finished with 13. Senior Drew Black pulled down 11 rebounds and dished out three assists.