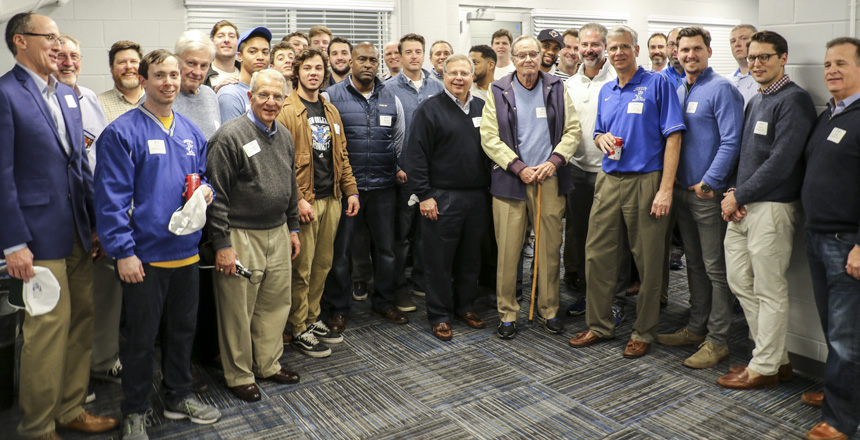 Alumni from the Classes of 1948 to 2017 meet in the renovated coaches’ office for the exclusive talk that preceded the historic matchup between Jesuit and Warren Easton.

Unlike a typical weekend basketball game, the events that surrounded the on-court action served as major highlights of Friday’s well-attended Basketball Homecoming 2018. Before the Homecoming game and during halftime, basketball alumni and their families reunited to celebrate two worthy milestones—the renovation of the Birdcage (Jesuit’s gymnasium) and the 70-year anniversary of the 1948 state championship team.

View the Photo Gallery of the 2018 Basketball Homecoming Event

Three of the six living team members—George Groetsch ’50, Joe Shirer ’48, and Jules Mugnier ’48—were in attendance, joined by family members and fellow basketball alumni at the pregame reception. The reception included an Open House of the renovated gym and locker rooms. During the featured halftime ceremony, members of the 8th grade team presented the honorees with plaques proclaiming the 70th anniversary of their achievement. 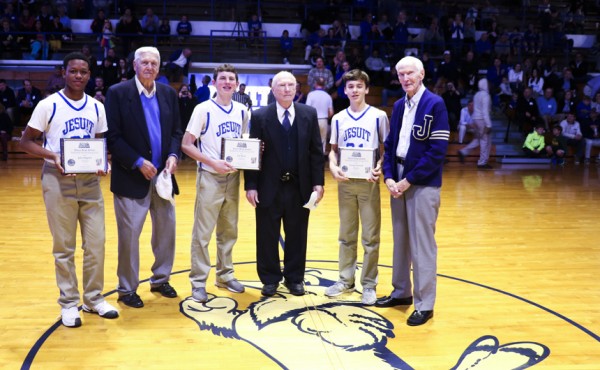 Three 8th grade hoopsters were each given the honor of escorting a 1948 honoree to center court and presenting him with his 70-year plaque. (From left) Jordan Johnson and Jules Mugnier ’48, Matthew Knight and Joe Shirer ’48, and Michael Britsch and George Groetsch ’50.

While basketball alumni received a special gift and complimentary food and refreshments at the door, many would argue the most special gift of the reception was the pregame talk in the beautifully remodeled coaches’ office. Former players were invited to join Coach Chris Jennings ’78 and his varsity team for a pregame meeting. The featured speaker was legendary prep coach Kevin Trower ’52, who coached basketball and baseball at Jesuit. Trower’s speech to the current team and the pregame reception ended simultaneously as basketball alumni and families took their places in the reserved bleachers on the visitors’ side of the gym. 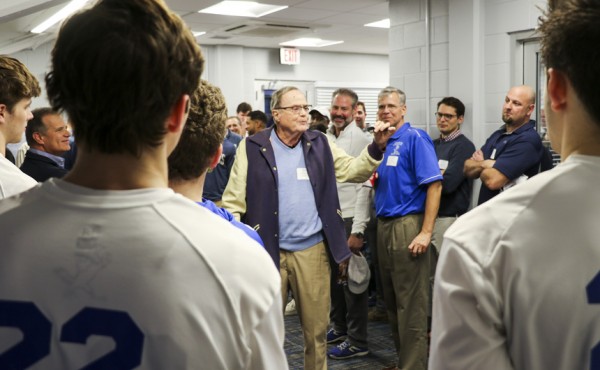 After a few words from president Fr. Christopher Fronk, S.J., and alumni director Mat Grau ’68, alumni cheered on their alma mater from their courtside seats directly across from the current Blue Jay team. Thanks to the generosity of Jesuit’s athletic department, admission was free for all who attended. Special thanks also goes to basketball alumni representative Greg Gillen ’79 and all of the parent workers for providing plenty of food and Blue Jay hospitality!

The Blue Jay team went 1-1 on the weekend, losing to Warren Easton on Friday night but recovering quickly with a win over Chalmette on Saturday. The Chalmette game marks Jesuit’s 16th victory of the season and puts the Jays’ win percentage over .750. The Blue Jays (16-5, 4-1) look to capture their fifth district win when they take on St. Augustine on Tuesday, Jan. 30.