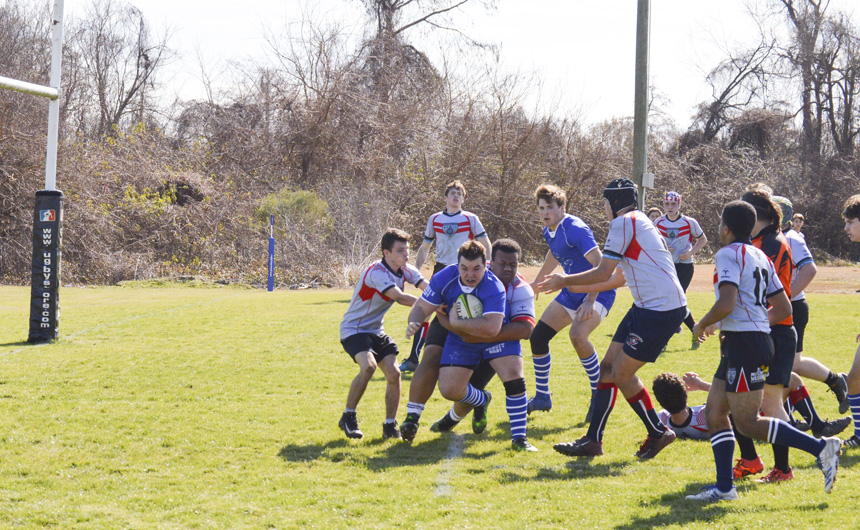 Senior Zac Beckmann carries a few Barbarian defenders for a ride into the try-zone.

This past weekend the reigning state champion Jesuit Blue Jays took on the New Orleans Barbarians (Holy Cross, St. Augustine). Although the Blue Jays are posting up a squad filled with new players, they showed fine form against the cross-town rivals, besting them 31-5.

View the Photo Gallery of the Rugby Match Against NOLA Barbarians

The match was a pitched battle for the first 20 minutes, with neither team finding their way into the try-zone. However, Jesuit maintained the majority of possession and were constantly attacking on the front-foot.

The Blue Jay’s offensive pressure eventually paid dividends, when junior David Childs scored the Jay’s first try of the season following a bruising run through the Barbarian’s defensive line. Senior Noah Tobin made the conversion kick, which gave the Jays a 7-0 lead. 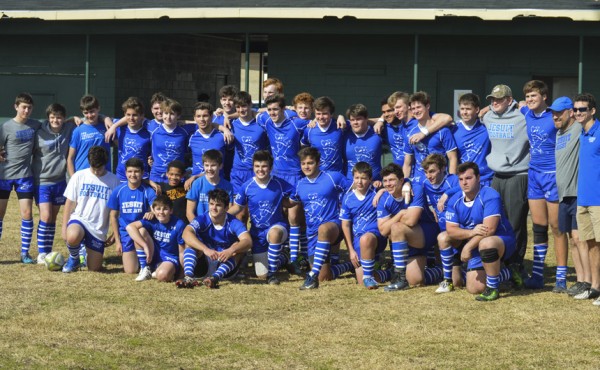 The defending champion Jesuit ruggers celebrate their first victory of the season.

Thereafter the Jays maintained steady possession and pressure, which was punctuated by numerous pounding runs by senior 8-man Charles Lobrano who found gaps – or made them – in the Barbarians defense. Lobrano galloped for a 40-meter run early in the second period and looked to surely score when sloppy ball-carrying resulted in a knock-on, giving possession back to the Barbos. It was a mistake Lobrano would not repeat, as he later made up for it with another signature run that found him dotting it down for another Jesuit 5 points.

Senior Zac Beckman, returning from a strained ACL, was determined to show the coaches that he was in top form as he fought off a veritable horde of Barbarians on the way to scoring his first try of the season. Matt Palmer showed a bit of razzle-dazzle with a slashing run through the Barbarian’s defense, which saw him wrong-foot several defenders and then turn on the afterburners to streak into the try zone.

And in perhaps the most impressive score of the day, the Jays put together a brilliant attack, which saw the ball being transferred through several players across the width of the field and ultimately finding Matt Palmer, who drew several defenders toward him and gave him the chance to pass to Noah Tobin – who snatched the ball out of the air, one-handed, in Odel Beckham fashion, on his way to an exhilarating score.

The Jays’ coaches were very happy with their performance, particularly their defensive pressure, which kept the Barbarians frustrated and out-of-shape throughout the afternoon. This weekend the Jays travel to Katy, Texas, to take on the fearsome Katy Barbarians.