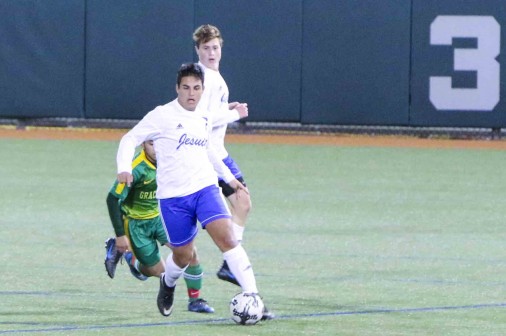 Juinor Chris Tadros, seen here in an earlier game against Grace King, tallied two goals for the Jays in their Dec. 16 victory over Rummel.

Tadros’s free kick gave the Jays a 1-0 lead at the midway point of the first half. His second goal of the game gave the Jays a 3-0 advantage. Two other juniors added to the scoring sheet. Preston Bordes’s netter put Jesuit up 2-0 at the half. Max Scheurich add the game’s final goal with about five minutes left in the match.

The win is Jesuit’s fourth in a row and gives the Jays a 4-0 mark in district competition. The Jays are 6-2-2 overall.

Jesuit invites Blue Jay soccer alumni to John Ryan Stadium on Saturday, Jan. 6, for the school’s annual soccer reunion. The 2018 event will feature the honoring of the Class of 2013 state championship team and the first official alumni game. After the pre-game festivities, the 2017-2018 squad will face Mandeville.