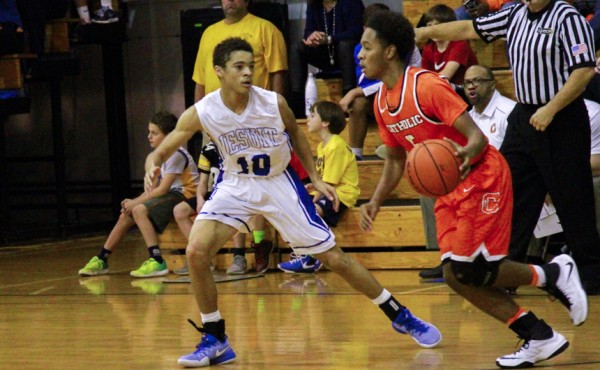 Junior Elijah Morgan led all scorers and rebounders with 25 points and seven boards. Morgan went 5-for-7 from beyond the arc and 6-for-10 from the free throw line.

On Friday night, Dec. 15, the Jesuit basketball team made their presence known in Baton Rouge and across the state. Behind a stingy defensive effort, the Blue Jays defeated the Bears of Catholic High, 69-54.

Once again the defensive success was led by senior Michael Hull and juniors Nick Artigues and Zach DeBlieux. Offensively, junior Elijah Morgan led the way with 25 points, which included 15 from beyond the arc. Hull added 11 points, and Morgan led all rebounders with seven.

The separating factor in Friday’s non-district victory was Jesuit’s smart shot selection. The Jays were very efficient (57%), making 24 of their 42 field goal attempts. Two players, Artigues and junior Noah Varnado, were 100 percent from the field.

Two double-digit road wins in one week is a rare accomplishment, one that head coach Chris Jennings ’78 deems “necessary” for the postseason. The 16-point victory in a non-conference game at Mandeville on Dec. 12 preceded the 15-point win over Catholic.

The Jays move forward with more non-district games, one at Warren Easton on Dec. 21 and a home game against East Feliciana the following day. The scheduled tip-off times for both games have been recently pushed up. The varsity game scheduled for Thursday, December 21 at Warren Easton will now tip off at 5:00PM, and there is no JV game preceding it. The Jesuit-Feliciana contest on Friday, Dec. 22 will now tip off at 5:30 p.m, and the JV game will now begin at 4:00 p.m. Any schedule updates or upcoming games can be found on the Blue Jay Basketball Schedule.