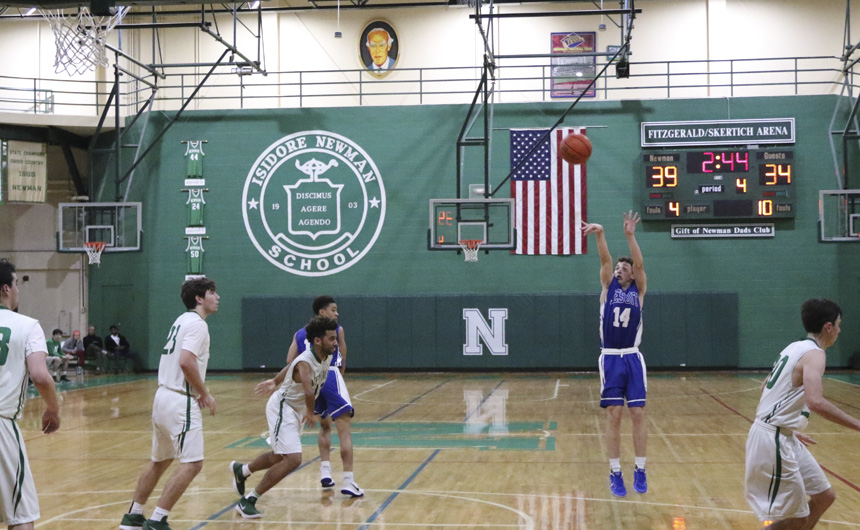 Will Landrieu led the offense with 19 points, going 5/8 from behind the arc. Landrieu’s hot hand in the fourth quarter kept the game close right up to the very end.

You could not have picked two more evenly matched teams for the semifinal game of the Newman Invitational Tournament. Jesuit and Newman battled it out on Friday night, each team having to fight for every point. The Jays came up just short of victory, losing to the Greenies 51-48.

But the Jays did not go down without a fight. Of all the lessons to walk away with from the tournament, this is a promising one. The Jays have a tremendous resolve in tough games, and it’s not just one player who can rise to the occasion. In each game of the tournament, a different Blue Jay stepped up to lead the team in scoring and make shots in critical moments.

On Friday night, it was Will Landrieu’s turn to shine. Landrieu led the team with 19 points, most of them coming in the fourth quarter when Newman seemed to be pulling away. He made five of his eight 3-point attempts on the night, two of them coming in the last 20 seconds of play. With 18 seconds left and the Jays trailing by six points, Landrieu hit a shot from the top of the key with a defender’s hand in his face to keep the Jays in the game. Then he knocked down another 3-pointer with seven seconds to again bring the Jays within one score of the Greenies.

Newman ended up winning the game from the foul line, never quite giving Jesuit a chance to take the lead. While the Greenies had a slightly higher shooting percentage from the field, the Jays forced more turnovers on defense.

The Jays are next in action on Tuesday night, traveling to play at Mandeville High at 7:30 PM. For basketball game summaries, roster, and schedule, visit the basketball page of the Jesuit website. 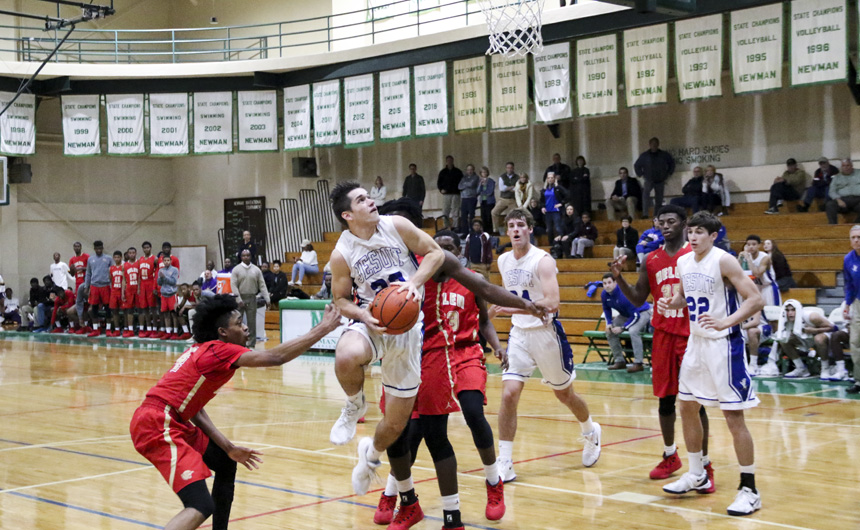 With four seconds remaining in the fourth overtime, Noah Varnado draws the foul that sent him to the free throw line for the game-winning shot.

In the most exciting Jesuit basketball contest in recent years, the Blue Jays wore down Helen Cox in not one, not two, not even three, but four overtimes! With the ending of each successive overtime being more exciting than the last, Jesuit fans enjoyed most especially the ending of the final overtime that concluded the game with a one-point victory for the Jays. The quarterfinal win pits the Jays against Newman in the semifinals.

Helen Cox had complete control of the first half, leading 25-16 at halftime. The Jays then opened up the second half with a 15-6 run on the Cougars, tying the game at 31 points with two minutes to play in the third quarter. The quarter ended with the teams tied at 39.

The teams traded baskets in the fourth quarter before Cox pulled away by four points with a 18 seconds to play. Patrick Schwing was fouled with 10 ticks on the clock and sunk both free throws to narrow the deficit to two. On the succeeding inbound,  Noah Varnado took control of a loose ball, and the Jays called a timeout to put together a play. With brilliant execution, Varnado curled around a screen for an open layup to tie the game as time expired.

In the fourth and final overtime, Varnado again saved the day by charging into the lane and drawing the foul with four seconds left. Varnado made the first shot to put the Jays up by one. His second shot missed, which turned out to be for the best since it left the Helen Cox team with no time to set up a play. The Jays prevailed 74-73 in an unforgettable performance.

Noah Varnado led all scorers with 29 points, making four of five 3-pointers and shooting 75% from the field. Elijah Morgan contributed 22 points, and Michael Hull had 11.

The Blue Jays face tournament host Newman on Friday at 6:30 PM in the main gym. The winner advances to the finals on Saturday night.

On Wednesday night, the Blue Jay basketball team defeated Lusher, 51-48, in the first-round win in the Newman Invitational Tournament. The win allows Jesuit to advance to the quarterfinal bracket and face Helen Cox on Thursday at 3:30 PM.

The Jays took the lead early on and held Lusher to 13 total points of offense in the first half. Jesuit led by 12 points at halftime. In the third quarter, the Lions narrowed the gap with explosive 3-point shooting, narrowing the Jays’ lead to four points by the end of the quarter.

The Jays were able to keep the Lions at bay, though, in the fourth quarter, mostly from consistent foul shooting in the stretch. The team shot 79% from the line (15/19), with Elijah Morgan going 10/12 from the stripe and taking most of the foul shots for Jesuit in the final minutes.

Morgan led all scorers with 21 points, followed by Michael Hull who had 12 points and 5 rebounds. Nick Artigues also contributed to the effort with 9 points.

After the quarterfinal game against Helen Cox on Thursday, a win will have the Jays playing again on Friday night at 6:30 PM in the main gym, but a loss will have them playing on Saturday at 5:30 PM in the Palaestra gym.