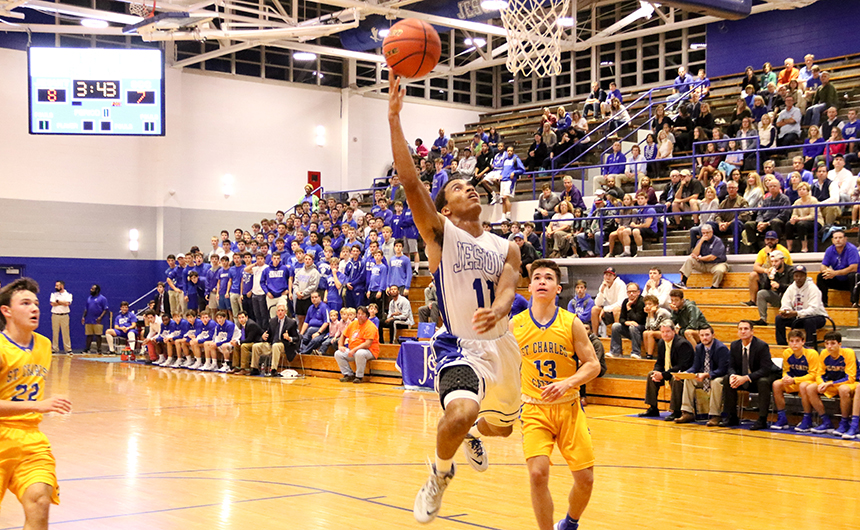 Senior Michael Hull lays it in at the end of a first-quarter fast break for two points.

First and foremost, the Birdcage is fresh off the first major rejuvenation of the building since its construction in 1957, and the facility has never looked better. New LED lighting, video-display scoreboards, reconfiguration of locker room space, and (of course) the addition of climate control make the historic home of Blue Jay basketball a premier complex in which to play a basketball game. You can look into the site megaslam.com.au/product-category/wall-mount-basketball-hoop-ring-system for wall-mount basketball systems and upgrade your gym or complex into a pro-level arena.

Even with the facilities across Banks St. looking as sharp as they do, the season opener against St. Charles Catholic demonstrated that this batch of Blue Jay hoopsters look just as polished as the gym they play in. On Wednesday night, the Jesuit basketball team opened its season with a 67-50 victory over the Comets from St. Charles parish. 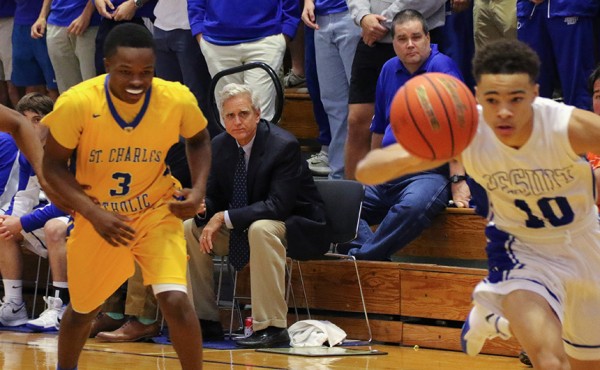 Coach Chris Jennings ’78 begins his 26th season as the head coach of the varsity basketball team.

After a first-round playoff loss last year that ended the season for the senior-laden team, a new crop of players are eager to step in to the vacancies and compete at a high level. Junior Elijah Morgan’s 29-point performance on Wednesday night showed just how much the All-District guard has improved in the off-season. The defensive combination of charges, steals, and hard-nosed man-to-man pressure limited the Comets to 50 points and forced 26 turnovers. In fact, the Jays scored 29 of their 67 points off turnovers. And they can all guard – senior Michael Hull and juniors Zach DeBlieux and Nick Artigues made for a tough starting cadre of Blue Jays that were a force to be reckoned with. Senior sharp-shooter Will Landrieu rounded out the starting five in the opener.

Michael Hull contributed 10 points to the effort, and the duo of senior Patrick Schwing and sophomore Kyle Haupt showed that the Jays can reach to their bench for dependable play. Schwing had seven, and Kaupt posted five. Though the Jays struggled from behind the arc in the game at just over 25%, the three-point ball is sure to be a threat when the Jays find their rhythm throughout the season.

Next up for the Jays is a combo of tournaments: the CYO Tournament starting Nov. 29 and the Newman Invitational starting Dec. 5. For a full listing of the 2017-2018 season schedule and the team roster, visit the team’s page on the Jesuit website at www.jesuitnola.org/basketball.  District play begins just after the Christmas break on Jan. 5.