Not as Easy as 1:23 – Jays Start Strong in the Tale of Two Halves

With 1:23 remaining in the first half, Jesuit sat in the driver’s seat against the Destrehan Wildcats. 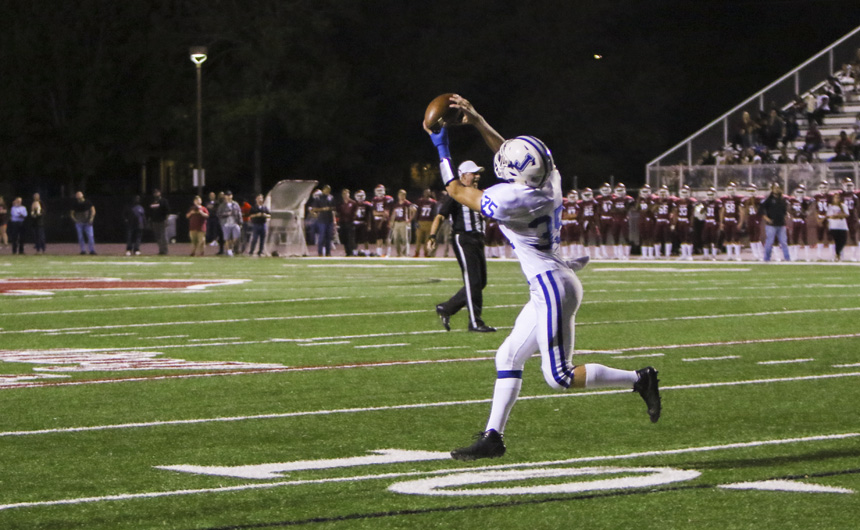 Junior wide receiver Brenden Berggren pulls down a pass in the open field and carries the ball for an 11-yard touchdown reception in the first quarter.

In the second to last game of the regular season on Friday night, the Jesuit football team traveled upriver to face off against the Wildcats of Destrehan High School. Although the Jays ended up losing the game 27-10, the first half showed all the signs that a Jesuit victory would be as easy as 1, 2, 3.

View the Photo Gallery for the Jesuit vs. Destrehan Football Game

After kicker Max Scheurich made a 28-yard field goal to give Jesuit a 10-7 lead, the Jays recovered the ensuing onside kick with four minutes to play in the first half. Although the Wildcat defense seemed ready to stop the drive by forcing a 3-and-out, a “running into the kicker” penalty kept the Blue Jay offense on the field. So the Jays found themselves with the ball on the Wildcat 45-yard line with three minutes left. They quickly drove into the red zone but were stopped short of a first down on the 12-yard line. Scheurich knocked the field goal through with 1:23 remaining, and the scoreboard read 13-7…but only for a few seconds.

Destrehan’s special teams unit was again penalized for having 12 men on the field, so the score went back to 10-7 but with the Jays in possession of the ball, a fresh set of downs, and a good chance to go up 17-7. At 1:23, the Blue Jays were squarely settled in the driver’s seat of this football game. So it seemed, at least.

Unfortunately, the worst that could happen…did. Senior quarterback Alex Watermeier helped the offense inch up to the Wildcat 5, but he was sacked on third down. Scheurich set up to make the same field goal he just attempted, but the Jays mishandled the snap. The ball was recovered by Destrehan and returned to the Jesuit 25.

The Wildcats turned in a 30-yard field goal at the horn, leaving the score 10-10 instead of 17-7. The momentum had completely shifted.

Defensively, the Jays controlled the first half. Wyatt Candies had a first-quarter interception, and Matthew Sauviac’s fumble recovery set up Jesuit’s lone touchdown when Brenden Berggren scored on an 11-yard pass from Watermeier. Offensively, the team showed a noticeably good mix of pass and run, creating different schemes and a lot of trips wide receiver sets. Even after the mistakes and a wild finish, Jesuit started stronger and appeared more confident throughout the first half.

The non-district game was, however, a tale of two halves.

The second half saw the Jays unable to move the ball offensively, causing the defense to spend far too much time on the field. The Wildcat offense depended on the run game out of respect for the Blue Jay secondary, led by junior safety Cameron Helm who made plays all over the field. Destrehan’s backfield, which included a versatile running back and a speedy quarterback, caused several problems for the worn out Jesuit defense. Destrehan embraced the home field advantage, outscored Jesuit 17-0 in the second half, and turned a tie game into a 27-10 victory.

“This was a very disappointing loss because we squandered several opportunities due to self-inflicted mistakes, especially on special teams,” said head coach Mark Songy. “Again, there were just too many special teams mistakes and an inability to score in the red area, especially inside the 10. Everyone played hard, as they always do.”

Jesuit will close out Catholic League play against Brother Martin next Friday at 7 PM at Tad Gormley Stadium. Members of the football Class of 2018 will celebrate Senior Night at the start of this can’t-miss Catholic league rivalry!

The Advocate | Destrehan capitalizes on Jesuit mistakes in 27-10 victory