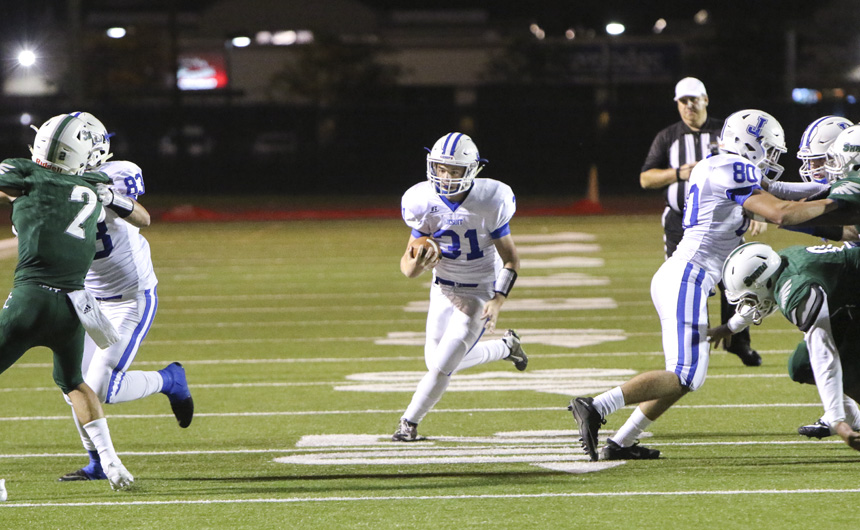 Senior Matt Alexander comes on in the second half to ignite the Jesuit offense, rushing for 74 yards and scoring two touchdowns.

On Saturday night at Hoss Memstas Stadium, the Blue Jay football team got exactly the confidence boost they need heading into the final stretch of regular season games. The game against the Shaw Eagles saw the Blue Jays playing aggressively on both sides of the football, and, for the first time in district play this year, that tenacity paid off in a 31-13 win.

Much of Jesuit’s success in pulling away from the Eagles late in the game can be attributed to two touchdowns, one running and one receiving, by senior running back Matt Alexander. For most of the game, the Blue Jays maintained control by moving the ball efficiently on offense and making Shaw earn every yard. But still, the Blue Jays found themselves in a close game at 14-13 with just under four minutes to play in the third quarter, allowing Shaw to squeeze in a touchdown in the final seconds of the first half and giving up a second touchdown on a pick-six early in the third quarter.

“I thought we had some missed opportunities in the first half,” said head football coach Mark Songy. “It was nice to see Matt (Alexander) come in, and I was very happy with the way the team grabbed the game by the horns. Matt has tremendous vision and knows how to take what he can get when he has the football in his hands.” 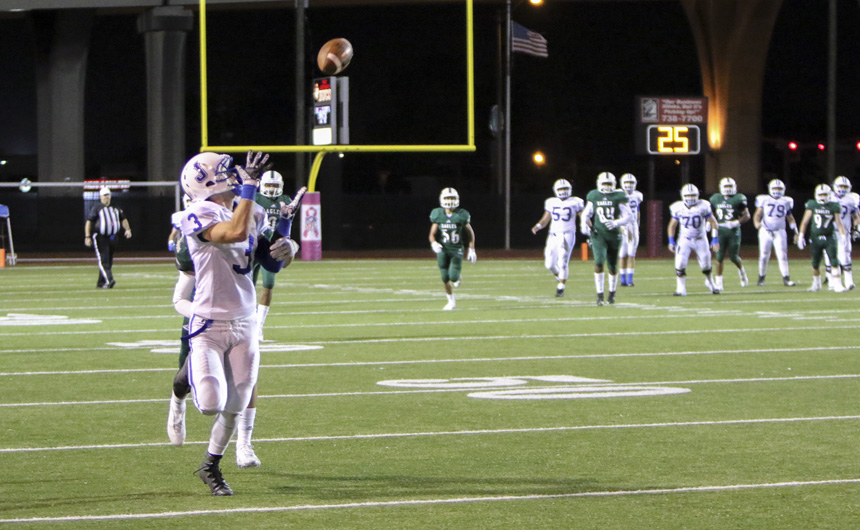 In the third quarter, junior Noah Varnado makes his second long reception of the night, this time for 43 yards.

Except for the mid-game scores by Shaw, the Blue Jays out-shined the Eagles in every other aspect of the game. The first score for the Jays came mid-way through the first quarter, when junior Will Moran found the end zone on a brilliantly executed reverse play. Jesuit extended its lead to 14-0 late in the second quarter on a 19-yard touchdown reception by senior tight end Dylan McKeough. The McKeough touchdown was set up by the first of two 40-plus yard receptions by junior receiver Noah Varnado.

The defense continued to show prowess up front, holding Shaw to -14 total rushing yards. In all the Jesuit defense only allowed Shaw one touchdown, and Shaw had to earn every yard of that long drive at the end of the second quarter. Junior Cameron Helm led the defense with six solo tackles and forced a late-game fumble. Senior Matthew Frischhertz and juniors Perry Ganci and Matthew Sauviac each contributed four solo tackles, and Frischhertz also forced a fumble.

Even with the commanding performance, Jesuit turnovers continue to be an issue late in the season. Two interceptions and an early fumble accounted for squandered opportunities in which Jesuit could have put Shaw away early. But the Blue Jays showed their resolve despite these setbacks and powered through the second half to victory. Matt Alexander led the charge on a third quarter scoring sequence, picking up two first downs on the drive and ultimately finding the end zone.

In the fourth quarter, the Jays tacked on a field goal to extend the lead to 24-13 with 6:24 left to play. On the next drive, senior quarterback Alex Watermeier found Matt Alexander on a gutsy 4th down conversion in the red zone to seal the victory at 31-13.

“This win really propels us into the next week.” said Coach Songy. “On Monday, you could tell the players were a little more relaxed and more spirited at practice, so it’s exciting to get this boost before we play a very skilled and well-coached team in Destrehan.”

As the Blue Jays look ahead to their powerful opponent on Friday, the true test for the Jays will be to eliminate turnovers and carry the momentum from the Shaw victory over for the final two games of the regular season. The game this Friday is scheduled for 7:00 PM at Destrehan.

The Advocate – Jesuit gets past Shaw for second win