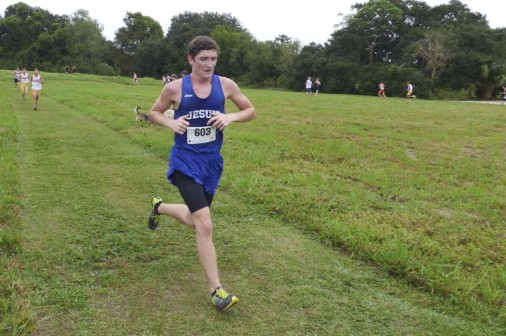 Jesuit’s cross country team closed out its regular season schedule at City Park on Saturday, Oct. 21 with a third place finish in the 22-team field at the Jack Schommer Invitational. Brother Martin, the meet’s host, took top honors with 54 points, followed by John Curtis with 57 and Jesuit with 103.

Next up is the biggest prize of the year to date, the District 9-5A Championships on Wednesday, Oct. 25. Race time is 4:45 p.m. at the City Park course.

Fans looking to predict the district outcome shouldn’t look to the Schommer meet as a barometer. The race’s proximity to the district meet prompts many area coaches to use wholly different slates of runners.

“Your top guys have to be fresh for district,” said Coach Rudy Horvath ’86. “And it’s hard to be fresh if you’re running your second race in five days.”

Lacing up their sneakers on Wednesday will be a senior-heavy seven-man roster, led by Jordan Tufts. Three other seniors will be racing as well: Michael Williams, Jonathan Arnold, and Brenner Rauch. Three underclassmen–junior Harrison LeBlanc, sophomore Brandon Hall, and freshman Jack Wallace–round out the day’s roster.

They’ll have their work cut out for them. Brother Martin and Holy Cross are heavy favorites. Of course, anything can happen on race day.

“That’s one thing I always preach to the guys,” said Horvath. “Rankings don’t mean anything. If we all go out and run PRs (personal records), we’ll be in the mix.”

“Win or lose, I always look forward to the district meet,” Horvath continued. “We always get a great crowd out there to support us, and I hope this year will be no different.”