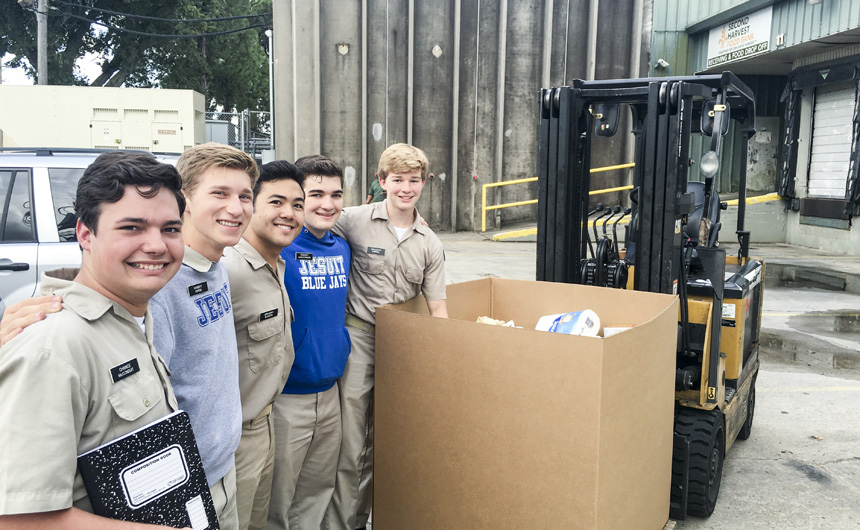 After the Mass of the Holy Spirit on Sept. 1, Jesuit principal Peter Kernion ’90 reminded students of the tremendous generosity given to Jesuit New Orleans by the Strake Jesuit community in the aftermath of Hurricane Katrina. Kernion then encouraged students to be generous themselves in order to support Houston families who were in need following Hurricane Harvey.

“Robert really took the lead on this one,” Murphy said. “He organized the logistics and a team of 15 guys who would pack and deliver the collected items to Second Harvest Food Bank. I did my part, but this was truly a student-led group effort.”

While student leaders coordinated the delivery efforts, the drive would not have been possible without the selflessness of the entire Jesuit community — students, parents, faculty, staff, and alumni. The combined efforts raised more than $35,000 for the families of those affected by the two recent storms – Harvey in Houston and Maria in Puerto Rico.

Jesuit High School joined dozens of other schools in the Archdiocese of New Orleans in collecting key items to assist those affected by the Hurricane Harvey. From Tuesday, Sept. 5, through Friday, Sept. 15, students collected non-perishable food items, toiletries, and school supplies in homeroom. These items were then delivered to food pantries and Catholic schools in the Houston area. Seniors Chance McConduit, Robert Cerise, Greg Buisson, Robert Christmann, and Malcolm Sundell (pictured) took leading roles in the delivery process.

The Jesuit efforts were in conjunction with Second Harvest Food Bank, an agency promoted by the Archdiocese Office of Catholic Schools in response to Hurricane Harvey. Students collected the following necessary items: non-perishable food items, water, MREs, and personal hygiene products. Students and their families also donated school supplies that were sent to the affected Catholic schools as they prepared to reopen and restart their school year.

In addition to attending to the needs of those in Houston, Blue Jays also collected money to support Colegio San Ignacio, the Jesuit High School in San Juan, Puerto Rico, as they recover from Hurricane Maria. That drive lasted from Oct. 2 – 6. In addition, Jesuit happily welcomed two transfer students from Colegio San Ignacio.  The two juniors started classes in the weeks following the storm and will remain at Jesuit for the remainder of the semester, possibly longer. Mr. Kernion called on students to assist them in any way possible during this difficult time.

The Hurricane Harvey collections provided an opportunity for the New Orleans community to display the same generosity it received during Katrina. Through both the Harvey and Maria relief drives, the community continues to do its part in living out the Jesuit motto of being Men for Others.