Rivalry Tailgate Expands for Another Great Year of Connection 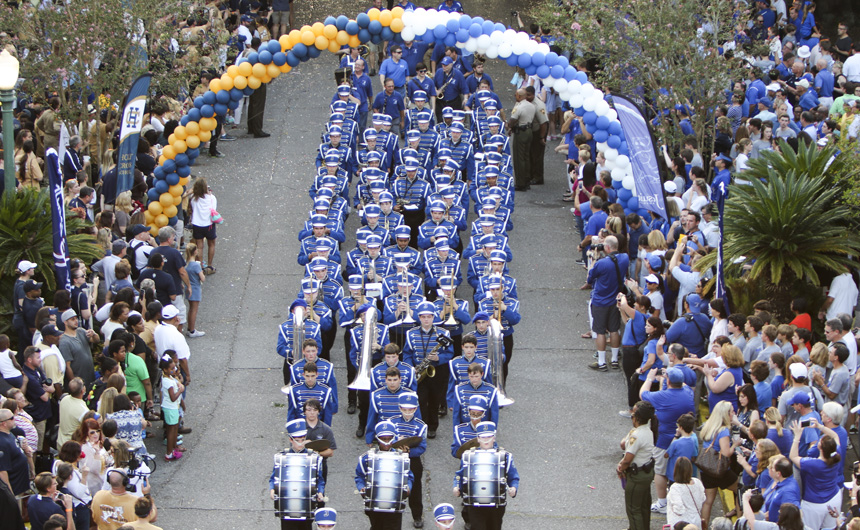 The Blue Jay Band marches into Tad Gormley Stadium during the Krewe of Rivalry Parade.

Jesuit and Holy Cross families met for a combined tailgate prior to the start of the 98th Rivalry football game at Tad Gormley Stadium. Jesuit families gathered at the blue and white tent on the stadium’s Marconi Drive entrance from 4:30 p.m. to 7 p.m. for food, fun, and Blue Jay Camaraderie. Parents of new Blue Jays who visited the tent were also treated to a complimentary ticket to the game. And Blue Jay Band alumni who gathered for a musical reunion also enjoyed the festivities.

Complimentary jambalaya, hamburgers, hot dogs, and soft drinks were served to Blue Jay fans. Max Gruenig ’06 of Koz’s Restaurant grilled hotdogs and hamburgers, while the Class of ’85 served up jambalaya for hungry families and friends.

The new addition to the Rivalry Tailgate Party was the inaugural Jesuit Young Alumni Great American Cookoff. Blue Jays from the Classes of 2000 to 2013 competed in a cookoff at their personal class tents, serving dishes ranging from Crawfish Wontons to Pork Belly BLTs. Celebrity Blue Jay Judges — Aaron Burgau ’92 (Patois/Central City BBQ), Brian Landry ’94 (Borgne), and Justin LeBlanc ’99 (Bevi Seafood) — were on hand to taste the dishes and award the 1st place award to the Class of 2004. 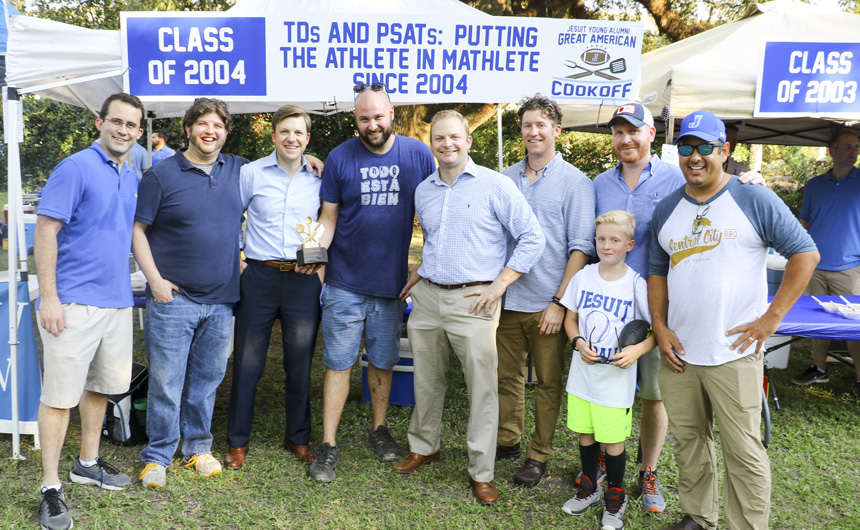 Fans sported their gray game-day T-shirts which were sold throughout the week and at the tailgate tent by Jesuit’s office of institutional advancement. and face painters were on hand for kids of all ages.

Jayson and Holy Cross’s Thunder the Tiger led the Krewe of Rivalry Parade at 6:15 p.m. The parade featured each school’s cheerleaders and dance team, accompanied by the marching band — including several alumni band members — proudly playing its Fight Song. The Distinguished Military Alumni and Legends of the Game from each school also took part in the parade.