Jays Fight Back in 98th Meeting of Jesuit – Holy Cross

Despite the 31-17 loss to Holy Cross, the Jesuit football team proved they still had a lot of fight in an inspiring third quarter surge. 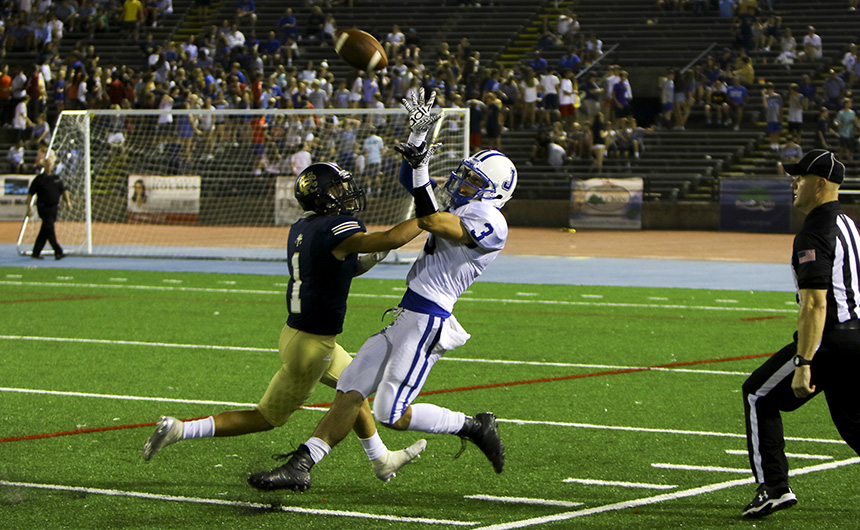 Junior Noah Varnado makes an athletic reception along the sideline at the end of the second quarter against Holy Cross. The play lit a fire under the Jesuit offense that carried over into the second half.

The 98th meeting of Jesuit and Holy Cross in the Great American Rivalry Series was an encounter both strange and hopeful for the Jesuit Blue Jays.

View the Photo Gallery from the Jesuit vs. Holy Cross Game

View the Photo Gallery from the Rivalry Tailgate and Parade

The 31-7 loss to the Tigers was strange because it seemed like two different football games were played under the lights at Tad Gormely Stadium, separated by the 4:00 mark in the second quarter. For the first 20 minutes of play, Holy Cross was stunningly dominant, amassing 31 points by scoring every time they touched the ball. The Tigers were poised to reverse the fate of last year’s Jesuit shutout victory and paced even to double the 38-point game score differential.

The Blue Jays, conversely, were foiled at every turn. As the clock ticked down to 4:10 in the second quarter and Holy Cross had just completed a 93-yard drive to improve their lead to 31-0, something had to give. A break had to come.

That break did come as senior quarterback Alex Watermeier scrambled out of the pocket toward the Jesuit sideline and threw a laser-precise rocket into the hands of junior receiver Noah Varnado. Varnado managed to scrape a foot in bounds and hang onto the contested ball for a massive 41-yard reception. That one play nearly doubled Jesuit’s total offensive yardage to that point in the game. 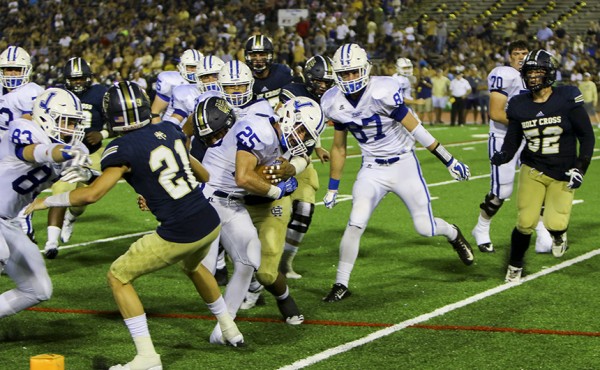 Senior Michael Torry crosses the goal line to give the Jays life at the end of the second quarter. The 4-yard touchdown run made the score 31-7.

Time ran out on the final Holy Cross drive of the half, and so both the offense and the defense left the field at halftime having tasted their first successful campaign on each side of the ball – bleak maybe, but important. The score at the break was 31-7.

“I believe that our guys came out ready to play from the start,” said head football coach Mark Songy. “Holy Cross turned some big plays on us early, and we found ourselves in big hole. At halftime, I told the players that the second half would show us what kind of character we have – whether or not we face the second half believing we could win this football game.”

What made the game so strange was that the tides reversed almost completely for the Tigers and the Jays at the end of the second quarter. The Jesuit defense played an inspired second half of football; so much so that, excepting a dead ball foul penalty, Holy Cross did not earn a single first down after halftime and were limited to less than 50 second-half yards of offense.

“We really shut them down in the second half” added Songy. “Honestly, Holy Cross is a really talented team and have some really skilled players. I was very proud of our guys, that we fought as hard as we did in the second half. It’s always a plus to come out of a test of character like this knowing that you’re a tough football team.”

The defense was also responsible for the second momentum driving play of the game when junior safety Wyatt Candies hauled in his first interception of the season on the Holy Cross 35 yard line. The excellent field position eventually set up a 7-yard touchdown pass from Watermeier to junior receiver Brenden Berggren, making the score 31-14 with 2:45 left in the third quarter.

The next drive for Jesuit started after a Holy Cross punt had pinned the Jays on their own eight yard line. Building momentum with each play, Watermeier connected first on the back shoulder of Noah Varnado for 31 yards, then on the opposite side of the field to junior receiver Robert McMahon for another 19. The drive eventually led to a field goal and a narrowed deficit of 31-17 with 10:24 left to play.

That moment in the game stands out as one of clear hope for the Blue Jay football team in the 2017 football season. With a record now of 1-4 on the season, the fighting Blue Jays had picked themselves up after taking a stunning first-half punch from Holy Cross. To get within two scores and have a shot at victory seemed impossible in the first half. And yet the Jesuit football team found itself in this position.

Although the Holy Cross defense was able to hold back Jesuit’s fourth quarter attack, Jesuit has much to be proud of in preserving the aggressive Blue Jay spirit and battling their way back into the fight. This is the why there will never be a dull moment in the oldest rivalry in the city, a rivalry that will long endure as a testament to the rich legacy each school carries on in the city of New Orleans.

The Blue Jays have a week to prepare for their next challenge of the season, facing the John Curtis Patriots next Friday night at the Shrine on Airline. Kickoff is set for 7:00 PM.