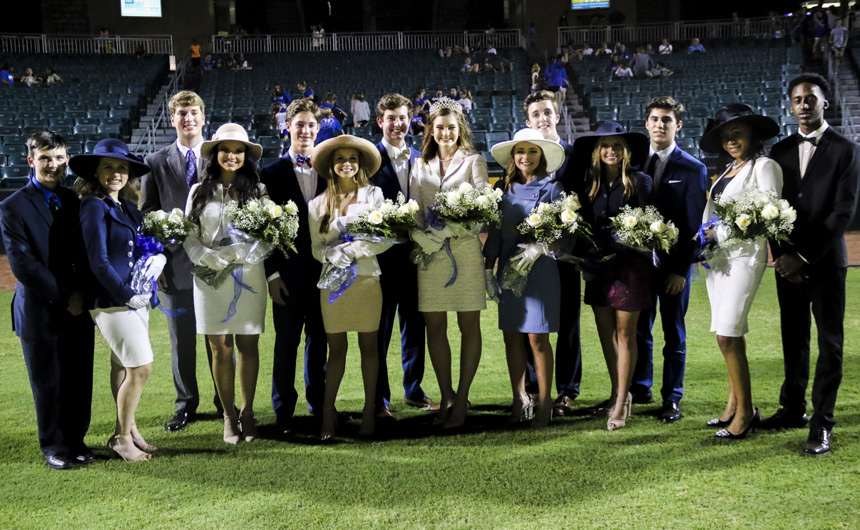 The Student Council presented the 2017-2018 Homecoming Court at the Sept. 22 game against St. Augustine at the Shrine on Airline. The Court was formally greeted by Jesuit’s Jayettes, the MCJROTC’s Color Guard, and accompanied by music from the Blue Jay Marching Band.

This year’s freshmen couple is Mr. Jaylan Scott and Ms. Erin Marrero. Jaylan, a freshman, is a member of the Jesuit Football, Basketball, and Track & Field Team. In college, he plans to study Mechanical Engineering or History. Erin is a sophomore at Dominican High School where she is a Student Ambassador. Erin hopes to study forensics in college.

Our junior couple is Mr. Joshua Shanks and Ms. Marigny Hemenway. Joshua is a member of the ROTC and Blue Jay Band. His career goal is to become a computer technician and game developer. Marigny is a junior at Ridgewood Prep where she is the Key Club secretary and member of the school band and Peer Helpers. She wants to study music and business in college. 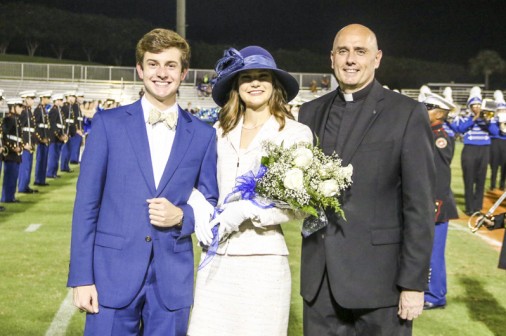 This year’s first senior couple is Mr. Benjamin Brodnax and Ms. Abby Haydel.   At Jesuit, Ben is an athletic trainer and Eucharistic minister. He is also a member of Sodality, Pro-Life Club, and Campus Ministry. He plans to study Accounting and attend law school. Abby is a senior at Dominican High School where she is on the Track Team. She is also a member of the Pro-Life Club, Student Council, and Christian Leadership Club, in which she serves as a student preacher and eucharistic minister. Abby hopes to pursue a degree in special education at the University of Southern Mississippi.

Our second Senior couple is Mr. Matthew Palmer and Ms. Bridget Glueck. Matthew is on Jesuit’s Rugby Team and is a member of Peer Support. Matthew plans to play rugby in college and study Law. Bridget is a senior at Dominican High School where she is a member of the Student Council, French Club, and Pro-Life Club. She is also a member of the Jesuit Cheerleading Team. Bridget plans to study special education at LSU.

Our third senior couple is Mr. Ryan Smith and Ms. Ally Lansou. Escorting Ms. Lansou was senior Frank Sclafani. At Jesuit, Ryan is a member of the Varsity Football Team and the National Honors Society. Ryan intends to attend medical school and become a surgeon. Ally is a senior at Mount Carmel Acadamy, where she is an officer for Teens for Life and is also a member of the National Honor Society and the Christian Life Community. Ally plans to attend medical school in the hopes of becoming a dermatologist.

This year’s fourth senior couple is Mr. Aubert Waguespack and Julia Hollander. Aubert is a member of Peer Support and participates in Intramurals. He intends to study Medicine. Julia is a senior at Mount Carmel Academy, where she is an anchor for WMCA and a member of the National Honors Society, Latin Honors Society, and Teens for Life. She is also captain of the Jesuit Cheerleading Team. Julia would like to earn a master’s degree in psychology from LSU.

This year’s fifth senior couple is Mr. Alex Watermeier and Ms. Raegan Tafaro. Escorting Ms. Tafaro was senior Grant Saunders. At Jesuit, Alex is a captain on the Varsity Football Team. He is also a member of the Varsity Baseball Team and National Honors Society. After Jesuit, Alex hopes to earn a business degree and pursue an MBA. Raegan is a senior at Mount Carmel Academy, where she is a member of Teens For Life and Mount Carmel Cubs Against Destructive Decisions. She is also co-captain of the Jesuit Jayettes. She plans to pursue a nursing degree from LSU.

The Senior Maid who was elected 2017-2018 Jesuit Homecoming Queen by the senior class is Ms. Abby Haydel. 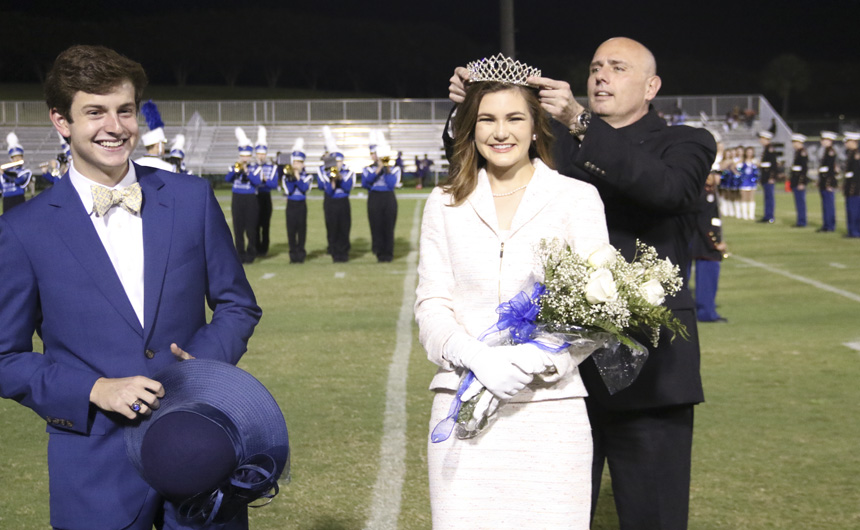 This announcement concluded the 2017-2018 Jesuit High School Homecoming Court presentation. Congratulations to Ms. Haydel and every member of the court.