Jays Shine Early But Fizzle Out in District Opener

The Jesuit football team falls in the district opener to the Purple Knights of St. Augustine, 37-24. 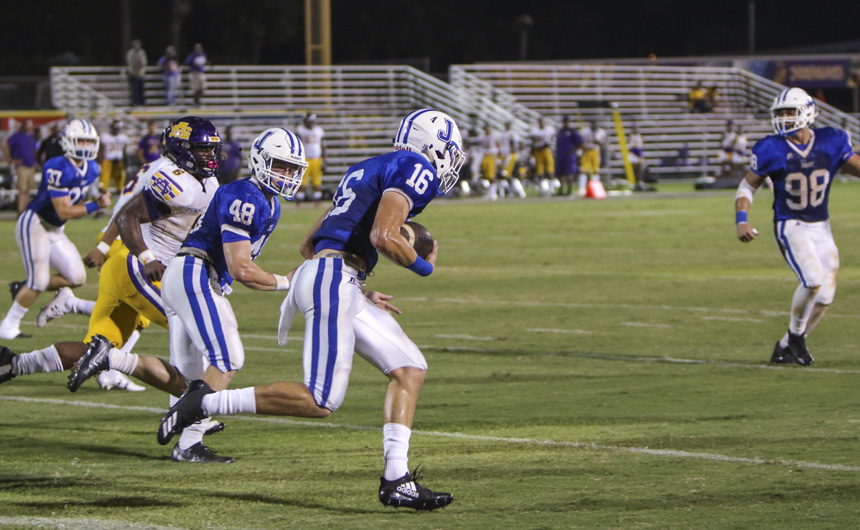 Junior Cameron Helm gets a handle on the blocked punt in the 1st quarter and turns on the jets for an 80-yard touchdown run.

Entering district play fresh off a 42-10 rout of Central High of Baton Rouge, hopes were high for the Jesuit football team as they took on St. Augustine Friday night at the Shrine on Airline. The opening minutes of the first quarter revealed a Blue Jay team that seemed poised to ride that winning momentum into district play.

The Jays were the first onto the scoreboard with an early field goal that capped off a controlled, first quarter drive downfield. When the Purple Knights sought to even the score with a first quarter field goal of their own, junior Perry Ganci broke through the line to block the kick. Fellow junior Cameron Helm scooped up the ball and took advantage of some key blocks to go 80 yards for the score. With just a minute to go in the first quarter, the Blue Jays were ready to carry their 10-0 lead into the next period of play. 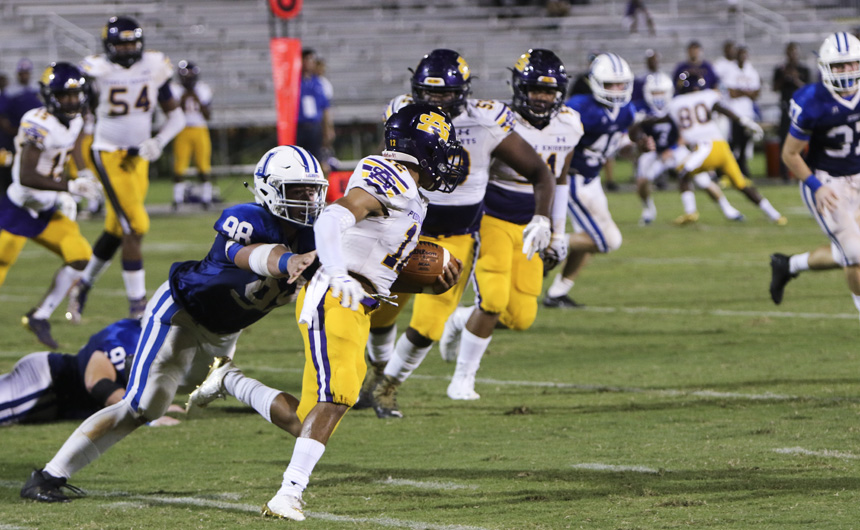 Junior Perry Ganci leads the team in solo tackles, with 34 on the season. He added 12 of those 34 against the running back corps from St. Augustine.

But things started to unravel quickly for the Blue and White. St. Augustine struck back hard, grabbing their first touchdown on an interception and forcing a fumble on the ensuing kickoff. Within minutes the 10-0 lead had turned into a 13-10 deficit.

The Jays went scoreless in the 2nd and 3rd quarters despite promising drives into the red zone. It wasn’t until the fourth quarter that the Jays were able to get back on the board with two throwing touchdowns. Senior quarterback Alex Watermeier connected first with junior Robert McMahon on a 10-yard pass with 10:00 minutes remaining in the game. Watermeier’s second touchdown pass went to junior Will Moran, who caught the 12-yard pass just inside the goal line.

The Blue Jays amassed a total of 281 yards of offense on the night, 161 passing and 120 rushing. Willie Robinson led the ground game with 57 yards, and tight end Drew Black led all Jesuit receivers with 39 yards on 2 catches.

On the other side of the ball, Perry Ganci continued his streak of defensive dominance. In addition to the blocked field goal, he also tallied an impressive 12 solo tackles.

Little needs to be said about Jesuit’s next district opponent. It’s Rivalry Week! With preparations well underway for festivities surrounding the game, the 98th meeting between Jesuit and Holy Cross is sure to be great one. Kickoff is set for 7:15 PM at Tad Gormley Stadium, with tailgating fun beginning outside the stadium on the Marconi St. side at 4:00 PM.