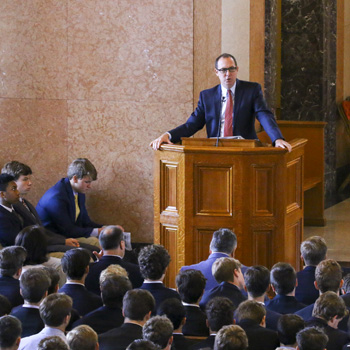 Jesuit principal Peter Kerion ’90 addresses students after the Mass of the Holy Spirit to remind them of the generosity given to Jesuit New Orleans by the Strake Jesuit community in the aftermath of Hurricane Katrina. He then encouraged students to be generous themselves in this drive to support Houston families who are in need following Hurricane Harvey.

In the aftermath of the catastrophic flooding in the Houston area, members of the Jesuit High School community in New Orleans have sought the best means to be of service to the people in Houston who find themselves in need following Hurricane Harvey.

There are two ways that the community of Jesuit High School will respond to the current needs of the victims of flooding in Houston:

Jesuit High School will join dozens of other schools in the Archdiocese of New Orleans in collecting key items to assist those affected by the storm. From Tuesday, Sept. 5, through Friday, Sept. 15, students will collect non-perishable food items, toiletries, and school supplies in homeroom. These items will then be delivered to food pantries and Catholic schools in the Houston area.

The Jesuit efforts are in conjunction with Second Harvest Food Bank, an agency promoted by the Archdiocese Office of Catholic Schools in response to Hurricane Harvey. Needed items are:

Additionally, a “Child-to-Child” school supply drive will collect school supplies for students in the affected areas. Students and their families can consider donating school supplies such as notebooks, paper, pens, pencils, crayons, markers, scissors, glue, and even books that can be sent to schools in the flood-affected areas of Texas. The supplies will be sent to the affected Catholic schools as they prepare to reopen and restart their school year. All donations should be brought in during the homeroom period. 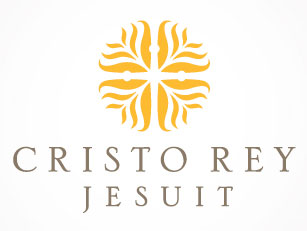 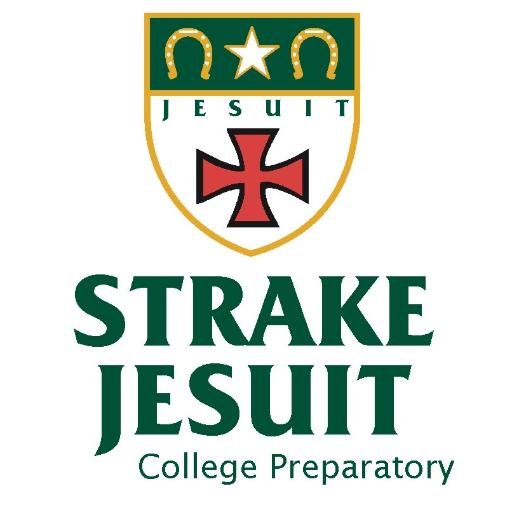 Both schools have spent the past two days assessing the needs of students as well as faculty and staff. Cristo Rey Jesuit called all of their families and Strake Jesuit sent out a survey to all of its families. Between the two schools about 50 families have been flooded out of their homes (30 from CRJ and 20 from Strake Jesuit). In the next few days, more families will undoubtedly be identified as needing assistance. These families have immediate needs for shelter, food, clothing, transportation, school supplies, school lunches, legal assistance, counseling, and other basic necessitates. No doubt there will be longer term needs as well.

Members of the Jesuit New Orleans community seeking to provide financial assistance for the long recovery after Hurricane Harvey should make a donation here. Contributions will help meet both immediate and long-term needs, not only of the schools, but more importantly, the people and families who make up the school communities. Donation can also be made by students in their homeroom classes.

Hurricane Harvey has been more catastrophic than anyone could have imagined. Thankfully, none of the families or faculty and staff has been seriously injured on account of Harvey.

Hurricane Katrina was a difficult and chaotic time here in New Orleans, but one heartening part of an otherwise terrible disaster was the overwhelming support our region received from folks around the country, especially those in Houston and at Strake Jesuit, who took in 400 Blue Jays. The Hurricane Harvey collections provide an opportunity for the New Orleans community to display that same generosity, to live out our motto of being Men for Others.