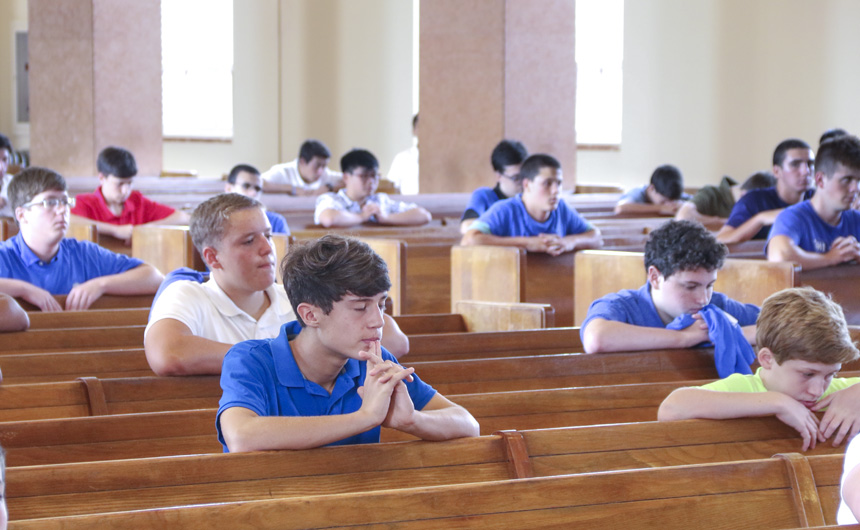 Freshmen kneel in prayer during one of the adoration periods in the Chapel of the North American Martyrs.

Members of the Class of 2021 returned to campus on Saturday, Aug. 26, for their annual retreat. The Freshman Retreat gives students the opportunity to develop in their capacity to be “loving” — one of the five elements in the Profile of a Graduate at the Time of Graduation.

The retreat began with an activity on Will Clark field in which the retreat t-shirt was distributed to the freshmen in attendance. Following the activity, the class split up into three groups for a cycle of retreat exercises. As one group moved to the conference room on the third floor for a series of upperclassmen speakers, another group listened to a talk on purity and friendship given by math teacher Mr. Michael Armelin. Students were challenged to seek out friends who encouraged them to be their best and to not settle for friends whose influence would be harmful. A third group spent time in prayer in the Chapel of the North American Martyrs. The Blessed Sacrament was exposed, and freshmen had an opportunity to go to confession. Br. Larry Huck, S.J., also guided students through a meditation on a passage from the gospels. 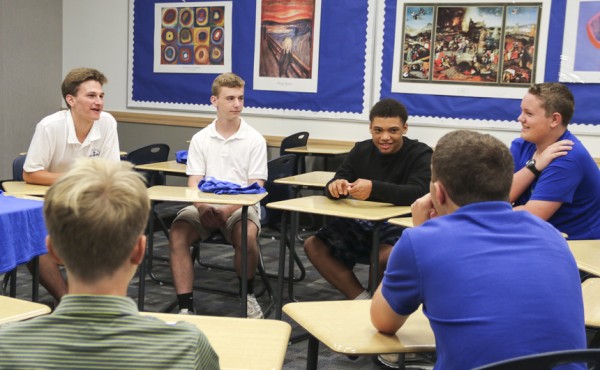 Senior Ben Finicle leads a group of freshmen in a small group discussion.

Throughout the retreat, the students had discussion in small groups of roughly ten students, discuss their own friendships as they have developed so far in the year they have been attending Jesuit. After the final small group of the retreat, students were dismissed from their meeting rooms into the hallways in anticipation of a Eucharistic Procession which wound through the second and third floors. Seeing the Lord carried through the school in procession helped the students realized that the life of grace is not restricted to moments of prayer or participation at Mass in the chapel, but reaches out to all parts of life. Study, recreation in the Student Commons, interaction with others (among other things) are all oriented towards the greater praise and service of God. Students were invited to follow the procession into the Chapel of the North American Martyrs for the sacrifice of the Mass.

The Freshman Retreat is the second retreat that students make in their time at Jesuit. In addition to growing in brotherhood with their classmates, each student is provided with the space to grow in his knowledge and love of God and is encouraged in his daily walk towards holiness. The theme for the night comes from the first letter of St. John: “Beloved, let us love one another, for love is of God; and he who loves is born of God and knows God” (1 John 4:7). Vital to the formation of students at Jesuit is this call to purity of heart, to love as Christ loves. As the Beatitudes reveal, it is the pure of heart who will truly be blessed, for they will see the face of God.