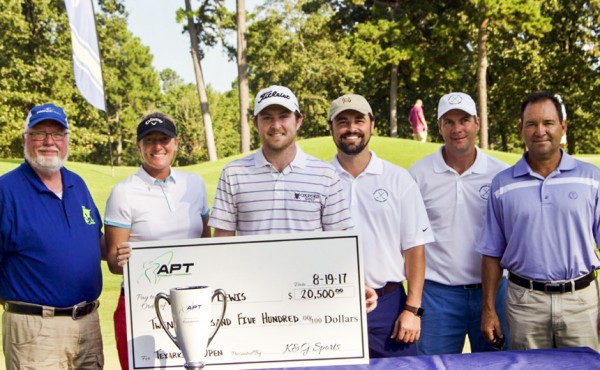 Myles Lewis of the Class of 2011 fired a 4-under 68 on the final day to capture his first professional win at Texarkana Country Club with a total score of 12-under par.

Lewis accomplished a memorable milestone in the Texas-Arkansas crosshairs where the third best tier of players in the country competed in the APT Tour’s Texarkana Open from August 16-19. The APT conducts professional golf tournaments in the mid-south region of the U.S. Going up against his LSU roommate and teammate for the final round turned out to be a blessing for Lewis, who said playing with his roommate felt like another round “at home.” Watch the video of Lewis’s post-win interview.

While at Jesuit, Lewis could have been the best player on the team and one of the best in the state as an 8th grader. Unfortunately, the LHSAA required varsity athletes to be at least a freshman. After his four years of Jesuit Golf, he had two team state championships (2010 and 2011) and three individual titles (2008-2010).

A four-year letterwinner from the 2011 to 2015, Lewis played in 25 tournaments in his four seasons with the LSU Tigers. He earned four top-10 finishes and nine top-20 finishes in his 25 career starts. Academically, he was honored by the Southeastern Conference with three selections to the SEC Honor Roll in consecutive seasons from 2013-15. Lewis graduated from LSU in May 2015 with a marketing degree. Since then he has worked diligently in his pursuit to make the PGA Tour, the highest level of pro golf. View Lewis’s career statistics at LSU.