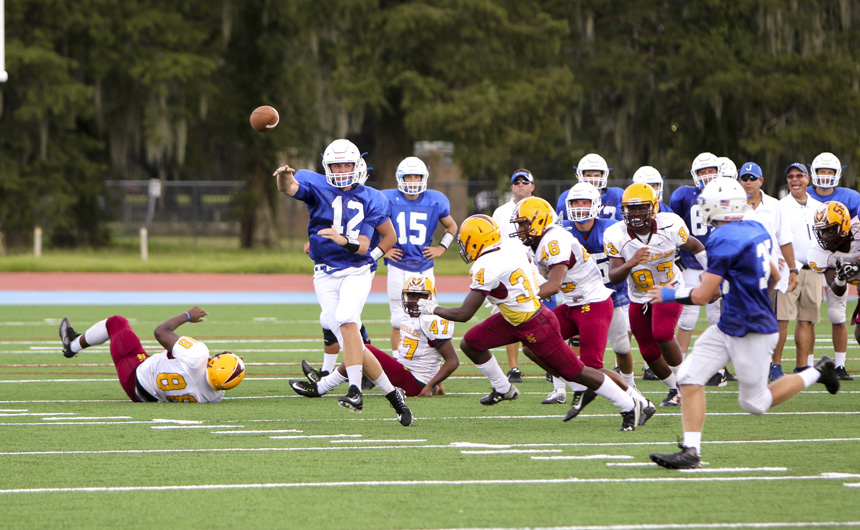 Senior quarterback Alex Watermeier connects on a pass across the middle to junior Brenden Berggren.

Among the many signs that the academic years is off and running is the familiar sight of blue and white contrasted against the green turf of Tad Gormley Stadium. On Thursday, Aug. 17, the Blue Jays football team returned to their familiar playing field to lace up their cleats against McDonogh 35.

The scrimmage gave coaches the opportunity to see players in action and confirm whether the choices they’ve made in determining the first team pan out in game situations. “We learned a lot about the team,” said head coach Mark Songy. “I see that there is a lot of promise as we move into the new season.”

With only roughly six players who saw action on the field last year returning in 2017, younger players have an opportunity to fill spots and make big contributions. Though inexperienced, there are real signs of strength in key areas. 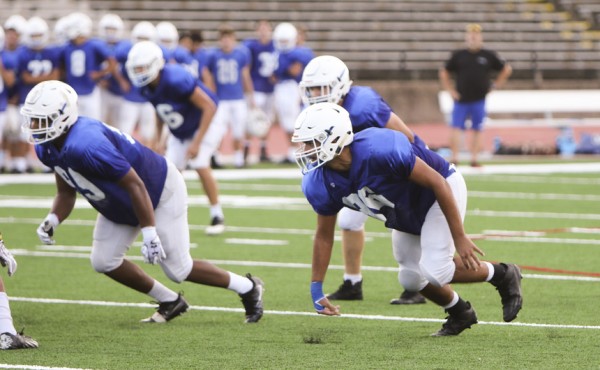 Defensive linemen Marquis Martin and Matthew Frischhertz get a good start off the line in Thursday’s scrimmage.

The defensive front had a tremendous day against the Roneagles. With only one senior in the corps, the young Jays make up in size and fierceness what they lack in age. If the running back from McDonogh 35 were able to make gains on the Blue Jay defense, it certainly wasn’t up the middle.

On offense, the story of the afternoon was inconsistency. After a very touch and go first period from the first team, the scrimmage ended with an explosion of activity, with big gains in the final drives. Senior quarterback Alex Watermeier struggled early on to find the mark, but connected on multiple 50+ yard completions late in the game. The contingent of receivers comprised of juniors Robert McMahon and Noah Varnado and senior Collin Miller also made impressive grabs downfield to complete the plays.

Watermeier’s late-game performance showed big improvement from where he was at this time last year. The backfield unit of senior Michael Torry and junior Willie Robinson also had a good day. Hardly ever getting caught behind the line of scrimmage, the backs ended the game with positive rushing yardage.

All in all the team had a impressive outing. “I was happy to see the way we were very physical out there,” Songy added. “We just played hard, and that always goes a long way. It’s early yet, and there’s still a long way to go to get to where we need to be, but I’m confident we’ll get there.”

Ending on a high note on both sides of the ball does great things for the team’s motivation going into a week of preparation for the Hahnville Jamboree on Thursday, Aug. 24.  Songy and his staff planned to scrutinize the video of the scrimmage and compare notes as part of the preparation for Jesuit’s next gridiron event.