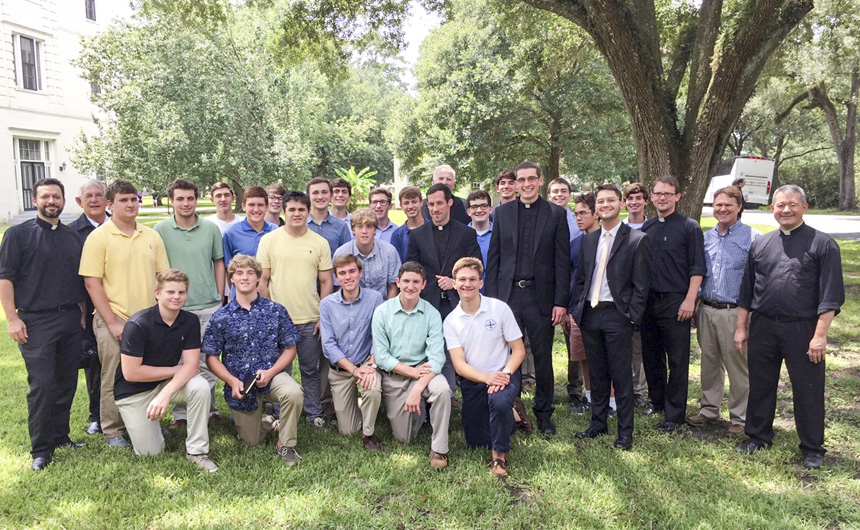 Over 30 members of the Jesuit High School community, including faculty, staff, and students from the St. Francis Borgia Retreat made the journey to Grand Coteau, Louisiana on August 12 for Vow Day for the New Orleans Province.

Two Jesuit alums, Jordan Jones, S.J. ’01 and Alex Coffey, S.J. ’11, took simple vows of poverty, chastity, and obedience, thus moving to the next stage of formation in the Society of Jesus. Another recent Blue Jay graduate, John Guerra, n.S.J. ’14, entered the novitiate the day before in Grand Coteau.

The weekend prior to the Feast of the Assumption of Mary (Aug. 15) draws large crowds to the Jesuit Novitiate of St. Stanislaus Kostka in Grand Coteau, La. Guerra was a member of the new class of novices who arrived on Friday, Aug. 11, while five second-year novices made their first vows on Saturday, Aug. 12. Jones and Coffey were two of those five men. They entered the novitiate together in August 2015, and now each will begin philosophy studies at a Jesuit university. 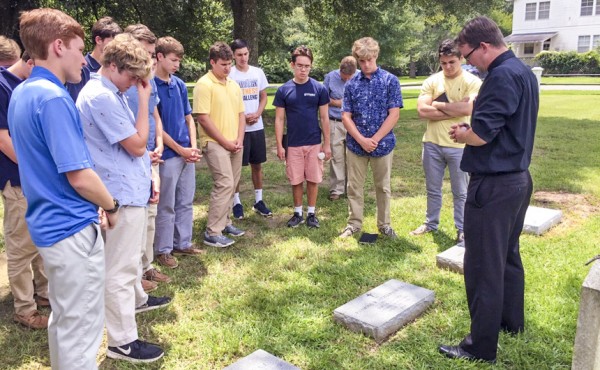 Ranging in age from 21 to 47, the new novices are embarking on a lengthy period of formation, beginning with two years in the novitiate during which they will study Ignatian Spirituality and the history of the Society of Jesus. They will work in a variety of Jesuit ministries, learn to live in community and make a pilgrimage. Very soon, they will engage in the Spiritual Exercises, a 30-day, silent retreat, as outlined by St. Ignatius Loyola, founder of the Society of Jesus.

After the Mass, the group of Blue Jays who attended the event had the opportunity to tour the facilities and grounds that included the Jesuit cemetery. There, many visited the graves of Jesuits who had close ties to Jesuit High School, including former presidents Fr. Raymond Fitzgerald, S.J., and Fr. Harry Tompson, S.J.