Retif Oil Has Tough Weekend in City Series, Winning Just One of 3 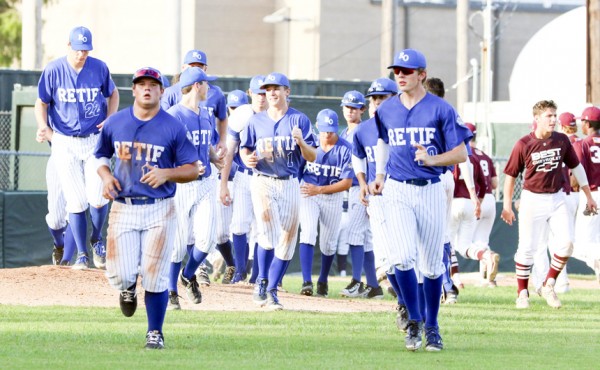 Following the 5-3 victory on Friday, Oilers run back to the dugout after shaking hands.

The city title was up for grabs this past weekend among Jesuit-based Retif Oil, De LaSalle-based Best Chevrolet, and Holy Cross-based Ponstein’s. The three teams met at Kirsch-Rooney Stadium on Friday and Saturday for the first American Legion postseason tournament — the First District City Series Championship.

Retif Oil wasted no time putting up numbers on the scoreboard against Best Chevrolet (BC) in Friday’s game. Scoring three runs in the first inning seemed like déjà vu, as this was a similar start to the last time they beat BC. Lee Blosser opened the game on the mound for the Oilers, allowing just one run in the first inning, while Zach DeBlieux and Will Hellmers came in as relievers. Although Deblieux allowed a run in the top of the 5th inning, the Oilers did not let the 3-2 scoreline last for long. They responded with two hits in the bottom of the inning, an effort that would be enough for a victory. Hellmers allowed a run in the top of the 7th inning, ending the game 5-3 in Retif’s favor.

In Game 1 of Saturday’s doubleheader against Ponstein’s, the old saying “defense wins championships” was never more true. Almost perfect pitching and defensive efforts from both teams left the game scoreless for six innings straight. On the mound, Christian Hess had seven strikeouts; and the Oilers had just one error, the only error by either team that game. From a hitting standpoint, Retif struck out five times. The top of the 7th demanded a run from the Oilers, but it was Ponstein’s who got it done in the bottom of the inning. The only hit by Ponstein’s came when they needed it most. Hess’s no-hitter was no more, but he had a great showing on the mound for all seven innings. The Oilers’ first postseason loss would be in a 1-0 game in which the hitting column read 3-1 in their favor.

At the plate thus far in the City Series, Sean Seghers and Cade Maginnis led the team with two hits each, one against BC and one against Ponstein’s. In Game 2 of the Saturday doubleheader, Collin Miller started the game against Best Chevrolet. BC led off the bottom of the 1st inning with two runs, forcing the Oilers to play catch-up for the remainder of the game. Miller had three strikeouts on the mound and allowed no runs after that first inning. Chris Favolora and Will Hellmers came in as relievers in the last two innings.

The Oilers struggled at the plate for most of the game. Seth Dardar had the team’s only hit in the 6th inning, which led to the team’s solo run. With nine total strikeouts, the team tripled the number of strikeouts in Friday’s win against BC. Losing 5-1 to Chevrolet, the Oilers are forced to play in the Southeast Louisiana Regional tournament. Many postseason games lie ahead for this group.

“The number of tournament games is one of the things I’ve loved about Legion,” head coach Joey Latino said last week before the City Series. “When we won in 2012, and went back to Shelby in 2015, people don’t realize just how many steps there are to this ladder. By the time you’ve gotten to Shelby, you’ve played 20-21 tournament games in addition to your [regular season] schedule. So, it’s a lot of fun…and very unique.” 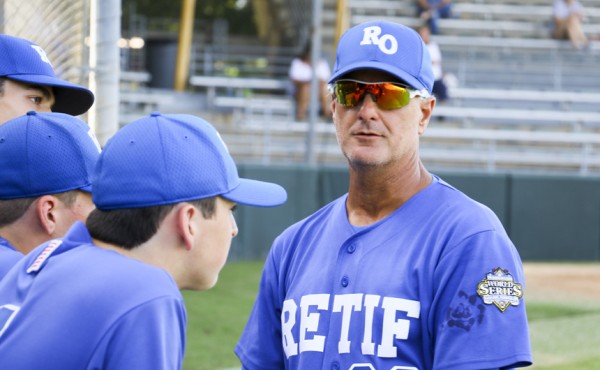 Coach Joey Latino speaks to his players from the dugout.

Latino’s Oilers (13-7, 1-2 postseason) will play in the Southeast La. Regional tournament at Kirsch-Rooney as the First District No. 2 seed. On Saturday afternoon, they will face Pedal Valves at Kirsch-Rooney at 3:30 p.m.

Outside the New Orleans area, GIS Engineering (Vandebilt Catholic) and Gauthier & Amadee (Independent, 17-4-1) make up the final two teams of the 8-team regional tournament this weekend. Again, the 8 teams competing are as follows:

The remaining tournaments are as follows: