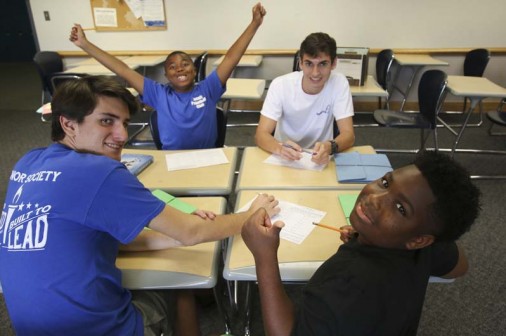 Fifty-seven students from area middle schools received certificates of completion during the closing ceremony for Operation Upgrade, held Friday, June 30 in the auditorium.

James Michalik, a religion teacher and the program’s director, also singled out students and staff for special distinction. Upgrader of the Year awards went to Tristian August and Justin Green. Jesuit rising seniors Gabe Wax, Andrew Kuebel, and Alex Thomas were honored as student teachers of the year.

Every simmer since 1971, Operation Upgrade has brought together disadvantaged but academically talented middle school students from all over the city for an intensive, five-week academic program (Operation Upgrade was the subject of the cover story in the Fall/Winter 2015 issue of Jaynotes, the magazine of Jesuit High School).

This year was an especially successful year in terms of student progress. A record number of students improved their scores on the High School Placement Test sampler by 30 or more points, indicating they had improved by the equivalent of an entire grade level (a fundamental goal of the program as exemplified by its name, Operation Upgrade).

Another graduate from the Class of 2017, Jamal Jordan, was singled out for special commendation. Jordan, who attended Upgrade for three sessions as a middle-school student, then came back and volunteered in the program for each of his years at Jesuit. Michalik’s unofficial calculations had Jordan logging nearly 2,000 hours with Operation Upgrade as either a student or a volunteer.