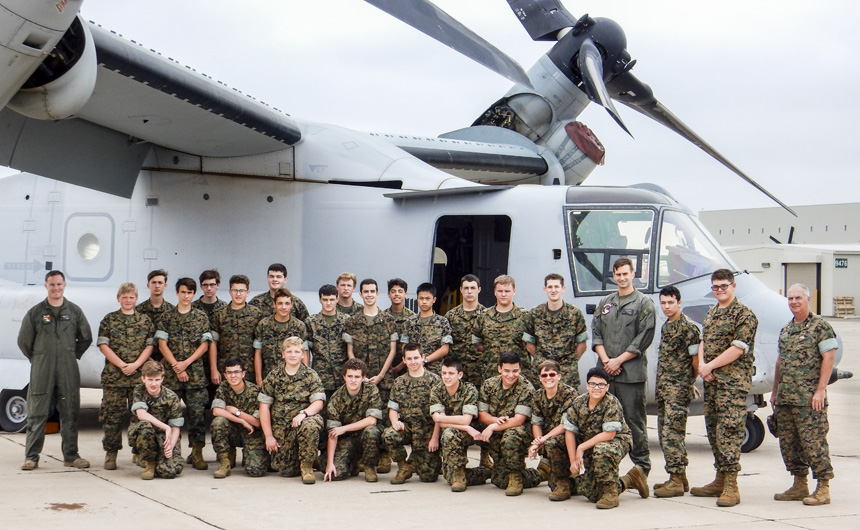 After a tour of the MV-22 Osprey tilt-rotor military aircraft transport unit, cadets pose for a final shot with the impressive piece of machinery.

On Monday, June 5, a group of 27 MCJROTC cadets traveled to San Diego, California, for the annual Cadet Leadership Camp.  The purpose of the five-day trip was to teach cadets leadership skills, build camaraderie, and get a taste of military life.

Upon arriving in San Diego, the cadets traveled to the Marine Corps Recruit Depot where they met a drill instructor who taught them drill and toured the MCRD museum.  Then, they traveled to the submarine base at Point Loma where they toured a fast attack nuclear submarine, the USS Alexandria (SSN-575).  After a long day, they checked into their hotel for leadership classes and to prepare for the next day.

In the following days, cadets toured San Diego harbor on a landing craft operated by Assault Craft Unit-1 and toured the USS Midway Museum.  They also visited Marine Corps Air Station Miramar, where they saw a military working dog demonstration, received a brief on Marine Aviation Logistics Squadron-21, toured the flight line, which included being briefed on the MV-22 Opsrey and the C-130J Hercules, and trained on the indoor simulated marksmanship trainer.  On Thursday, the cadets visited Camp Pendleton where they toured the airfield, visited the control tower, and trained on the combat convoy simulator. On Friday, they experienced a morning colors ceremony and a recruit graduation at MCRD San Diego before flying back to New Orleans.  During the week, the cadets also enjoyed some leisure time and built camaraderie when they conducted physical training, bowled, had dinner in Old Town San Diego, and enjoyed a cookout on the last night. 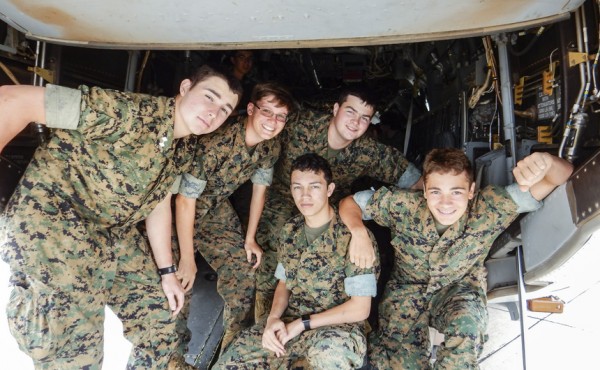 During the leadership camp, the cadets put their leadership skills into action, met and interacted with Marines and Sailors from many fields, and gained insight into the Navy and Marine Corps.  “I think the cadets had a great time on the trip,” said Lieutenant Colonel Huete, the Senior Marine Instructor.  “They got to practice the leadership skills they learned in the classroom, see what Marines and Sailors do in the service of their country, and have a good time learning and being with their friends.  It was definitely a worthwhile trip for the cadets.”

In all, the trip found its success within the cadets—many of whom learned and improved significantly without even realizing it.  The camp served as both a fun and rewarding experience for all who participated.