Two Jesuit High School teachers were recently honored as recipients of the 2017 Profile of a Jesuit Teacher Award, an annual recognition of faculty excellence during the school year.

This year’s recipients were social studies teacher Dan DiRosa and English teacher Tim Powers whose profiles below provide a glimpse into why these faculty members were nominated and selected for this year’s honor.

Teachers are nominated by their colleagues against the standard of being Open to Growth, Religious, Loving, Intellectually Competent, Professionally Competent, and Committed to Justice. In addition to a commemorative plaque, each teacher this year received $5,000. 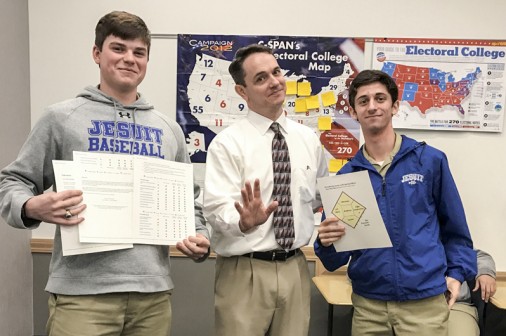 In his 26-year career at Jesuit High School, Dan DiRosa has established himself as an effective, enthusiastic member of the faculty. His home is the classroom where he is always prepared, highly knowledgeable, and inspirational as the crucial aspects of Government come alive.

To ensure that he is at the top of his game in his Government AP classes, Dan has attended several AP conferences during the summer. His students’ excellent performance on the Government AP exam is a testimony to Dan’s hard work.

One effective weapon in Dan’s teaching arsenal and one very much appreciated by his students is humor. Also, his students appreciate his ability to see their point of view and his treating everyone fairly. A major theme in Dan’s classes is social justice, something he teaches by personal example. As chair of the Social Studies Department, Dan has earned a reputation of being efficient, selfless, fair, and helpful while leading in a professional, but relaxed, manner.

Through the years Dan has served as Quiz Bowl assistant coach and moderator of the Student Council. Today when called upon, he assists at athletic events. He is present to his students at their many activities and to his colleagues at the various faculty events.

Dan’s warmth, openness, and kindness make him an excellent model of a Jesuit teacher. His easy-going, amiable style belies his ability to get things done. Dan DiRosa is a model of the Ignatian educator and an invaluable member of the Jesuit High School community. 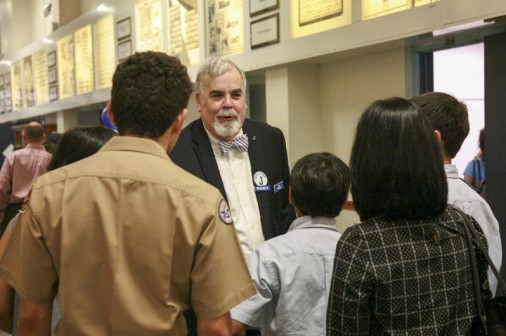 “To give and not to count the cost, to fight and not to heed the wounds…” These lines from St. Ignatius’s Prayer for Generosity capture the 36 years of service Tim Powers has given to the Jesuit High School community.His persistence in his craft, his dedication to his students, and his loyalty to the school have been manifested in so many ways.

In the classroom, Tim engages and challenges his charges with lessons that touch the students’ imagination and elicit insightful results. Tim’s hallmark traits of empathy, patience, and compassion make him a model to both his students and his colleagues.

For years Tim has served as the Chair of the English Department, working in concert with his colleagues in maintaining high curriculum standards. Long before taking over the helm of the department, Tim took the initiative to organize the department’s vocabulary program to give our students a stronger facility in expression.

Spiritually, Tim openly and proudly lives his faith. He is a daily communicant and a leader of prayer at morning assemblies and in his classroom. Saints’ feast days come alive as Tim uses the occasion to explain the importance of living a life in faith. As a member of the Ignatian Identity Team, Tim uses his wisdom and experience to ensure our school maintains its Jesuit character.

For years Tim was the moderator of the school newspaper The Blue Jay and coordinator of the lunchtime intramural program. Like the classic teacher Mr. Chips, Tim is competent, kind, generous, and congenial. Add to this a strong Catholic and Ignatian identity, and it is easy to see why Tim Powers is worthy of this year’s Profile Award.