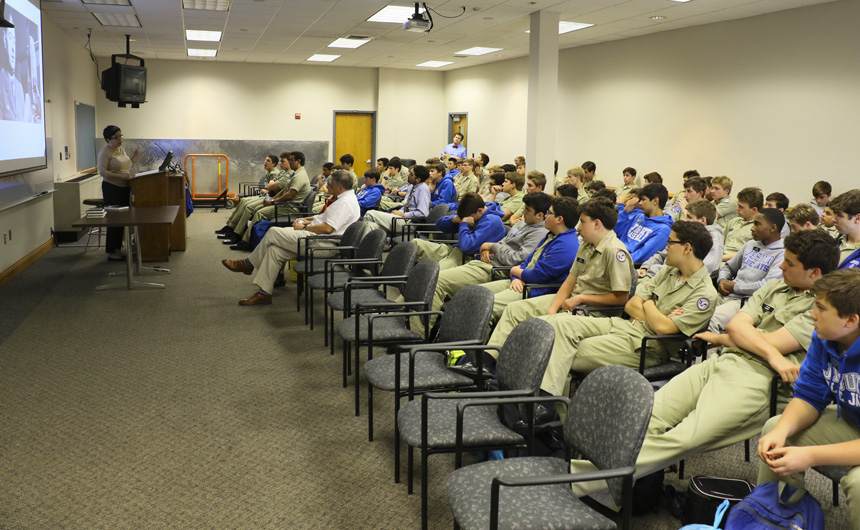 Nearly 100 students filled Room 329 during lunch to deepen their understanding of the human impact of World War II.

Students in Mr. Wade Trosclair’s western civilization class were treated to a presentation at lunch on the French Resistance movement during the Nazi occupation of France in World War II. Two speakers shared their expertise to make the lessons of history come to life for the students for the May 11 presentation.

First was Paige Bowers, author of a new book titled “The General’s Niece: the Little-Known de Gaulle Who Fought to Free Occupied France.” Bowers has spent time researching the life of Geneviève de Gaulle, who the niece of Gen. Charles de Gaulle and an integral voice for women during the movement. Her presentation gave context for some of the movements of the resistance efforts and the conditions in France after the occupation. 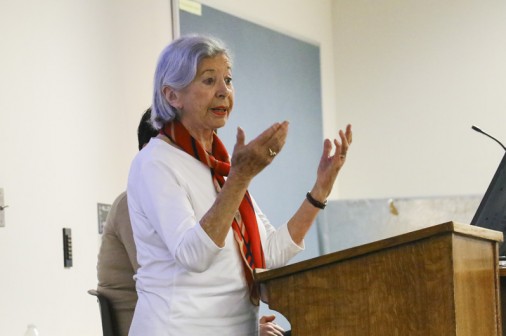 Nicole Spargenberg told stories of taking refuge in a hotel in a neutral zone during the occupation and later moving to a camp where she assisted a doctor in giving medical treatment to others in the resistance.

Also presenting with Bowers was Nicole Spargenberg, a member of the resistance herself living in France during the war. “Your life will not be roses,” Spargenberg related to the nearly 100 students gathered. “Things can happen from one minute to the next that will change everything in your life. When these things come, my advice is: Rise to the occasion.” Spargenberg was invited to participate in the presentation by her friend and Jesuit French teacher Mr. Patrick Benoit. She was 17 years old when the Nazi’s invaded France.

The General’s Niece: The Little-Known de Gaulle Who Fought to Free Occupied France

“My dear Uncle Charles,” twenty-two-year-old Geneviève de Gaulle wrote on May 6, 1943. “Maybe you have already heard about the different events affecting the family.” The general’s brother Pierre had been taken by the Gestapo; his brother Xavier, Geneviève’s father, had escaped to Switzerland. Geneviève asked her uncle where she could be most useful—France? England? A French territory? When no response came immediately, she decided to stay in France to help carry out his call to resist the Nazis. Based on interviews with family members, former associates, prominent historians, and neverbefore-seen papers written by Geneviève de Gaulle, The General’s Niece is the first English language biography of Charles de Gaulle’s niece, confidante, and daughter figure, Geneviève, to whom the legendary French general and president dedicated his war memoirs.

Journalist Paige Bowers leads readers through the remarkable life of this young woman who risked death to become one of the most devoted foot soldiers of the French resistance. Beginning with small acts of defiance such as tearing down swastikas and pro-Vichy posters, she eventually ferried arms and false letters of transit to fellow résistants and edited and distributed the nation’s largest underground newspaper, until she was arrested and sent to the infamous Ravensbrück concentration camp. The General’s Niece reveals the horrors the young de Gaulle witnessed and endured there that could have broken her spirit but instead inspired her many remaining years of activism on behalf of former prisoners and of France’s neediest citizens. Finally emerging from the shadow of her famous uncle, the life of this little-known de Gaulle adds a fascinating layer to the history of the second world war, including the French resistance, the horrors of and unshakeable bonds formed at Ravensbrück, and the issues facing postwar France and its leaders.

Paige Bowers is a news and features writer whose work has appeared in TIME, USA Today, the Wall Street Journal, the New York Times, People, the Atlanta Journal-Constitution, Atlanta Magazine, and others. A lifelong Francophile, she earned a master’s degree in modern European history in 2012 and teaches continuing education classes at Louisiana State University about French history and culture. She lives in Baton Rouge, Louisiana. 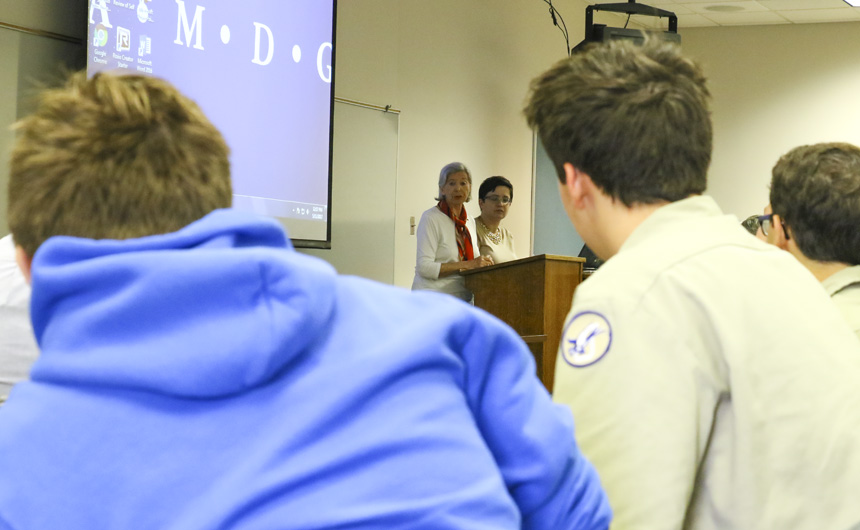 Freshman Ryan Danna (right) listens to Spargenberg’s response to his question during the question and answer session at the end of the presentation.