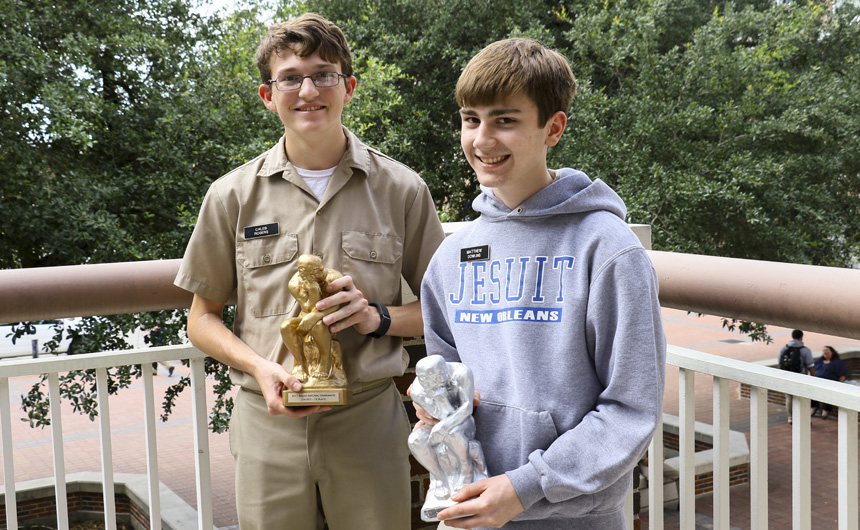 On Friday, April 28, the Academic Games team traveled to Wheeling, West Virginia to compete in the National Tournament put on by the Academic Games League of America. The annual, three-day tournament hosted nearly 800 players from around the nation.

There were 11 Blue Jays who participated in the competition. In addition to Rogers, Dowling, Schenck, and Mardia were David Gravolet, Michael Farrugia, Tanner Tripoli, Daniel Sentilles, Ryan Tucker, Nicholas Cibilich, and Aqib Zakaria.

The Academic Games Leagues of America is a non-profit organization which encourages and conducts academic competitions at local and national levels. The local league – the New Orleans Academic Games League – plays four of the six national games: Equations, ON-SETS, Propaganda, and Presidents. Propaganda and Equations are played in the fall; Presidents and ON-SETS in the spring. 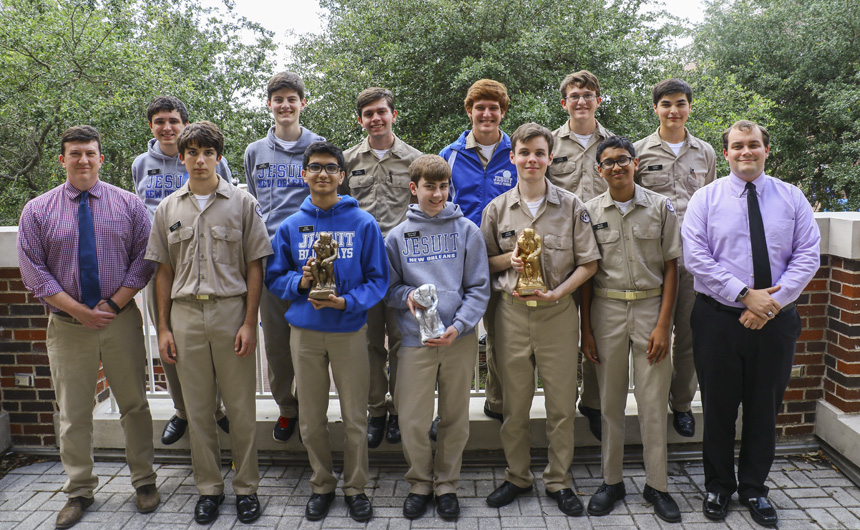 A little about each game…

Presidents is a social studies game. Players learn how presidents developed personally and professionally, how they reacted to or changed the times in which they served, what types of families they came from, and how they were affected by the political climate surrounding them. Players also learn about other major events that may have happened during a presidential term. They learn to assimilate all of these different facts into a unified whole for a better understanding of how the United States government has worked in different historical times.

On-Sets is a mathematics game. This game is very valuable in teaching about spatial relationships. The mathematical content of the game is Set Theory. Players learn to create and describe sets of colored objects using Union, Intersection, Set Difference, Set Complement, the Universe, and the Null Set. Players are challenged to use their mathematical knowledge and skills in increasingly creative ways and usually learn more from applying their knowledge in the competition than they do in their normal classroom studies.

Propaganda is a language arts game. Players learn to recognize techniques of persuasion that are often used by advertisers, politicians, editorial writers, and in normal human interaction. Players on each team spend time studying together and exchanging ideas and notes as part of their learning experience. Actual play of the game is simple. A central moderator reads one or more sentences, and the player must decide which – if any – technique of propaganda is used.

Equations is a mathematics game. It is often referred to as The Game of Creative Mathematics.  All grade levels play with the same set of procedural rules, but each division level of competition introduces increasingly more difficult mathematical concepts for the players to use. Players are challenged to use their mathematical knowledge and ability and to develop new skills in progressively more competitive ways. Players usually learn more from applying their knowledge in the competition than they do in their normal classroom studies. Students who compete in Equations are often times more prepared to do well in their classroom math classes than their peers.