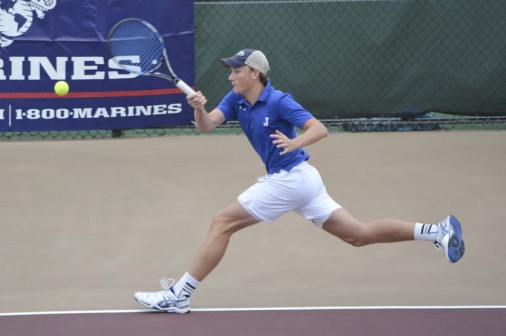 Senior Trey Hamlin had been denied twice in the doubles finals of the LHSAA state tournament. As a sophomore, it was a pair of his own teammates, twins Jonathan and Jacob Niehaus, who defeated Hamlin and partner Brandon Beck. Last year, another pair of brothers, the Shiells from St. Paul’s (Covington), hoisted the trophy, again leaving Beck and Hamlin a win short.

Senior Jack Steib, meanwhile, had seen his state tournament end in the doubles semifinals in each of the past two years. In both of those years, Steib was the anchor of a Line 3 doubles team that won critical matches against higher-ranked opponents.

This year, the two veterans, paired up for the first time, would not be denied. Hamlin and Steib cruised to the semifinals with three strong wins on Day One, and then closed the deal on Day Two by knocking out another pair of brothers, the top-seeded Bienvenus of Catholic High, in the semifinals (6-3, 6-3) and then beating Catholic’s Line 2 team in the finals (6-1, 7-5).

“I’m so glad for those guys,” said coach Travis Smith. “Trey is undeniably one of the best doubles players ever to lace up sneakers for the Blue and White. And Jack has been asked to do so much at Line 3 these last two years. Playing with Trey took a lot of pressure off him, and it showed in this tournament.”

The points picked up by Hamlin and Steib paced the Jays to a second-place finish at the state championships, held April 27 and 28 at the University of Louisiana-Monroe. Catholic High of Baton Rouge finished first, ending the Jays’ remarkable run of nine consecutive championships.

All five of Jesuit’s qualifying lines (two singles players and three doubles teams) picked up wins in Thursday’s first round. The second round, however, proved to be tough sledding.

In singles, senior Graham Buck knocked off an opponent from Byrd (Shreveport) before falling to an old nemesis, Logan Bueche of Baton Rouge High in the Round of Sixteen. Buck had lost to Bueche in last year’s quarterfinals.

Jesuit’s top singles player, freshman Jojo Sandoz, managed to rehab a significant ankle sprain incurred in a freak accident at regional competition in time to compete and you can read my review here where I have covered all the facts and figures. Sandoz, who was still wearing a walking boot as recently as Monday after stepping on a ball in a regional semifinal match, got final clearance from his physical therapist on the afternoon before the tournament. Heavily taped and still clearly hurting, Sandoz gutted out a first round win over an opponent from Hahnville before bowing out to Catholic’s Nick Watson, the eventual singles champion.

In doubles, Jesuit’s Line 2 team of Christian Lacoste and Andrew Ryan also hit a Catholic High wall in the second round. After dispatching a team from Sulphur in the first round, the junior duo played solid tennis but dropped a 6-3, 6-2 decision to the Bears’ Line 3 doubles team.

The surprise of the tournament was Jesuit’s Line 3 doubles team, which drew the Region 3 champions in the first round. Senior Leo Seoane and freshman James Henican were anything but intimidated, defeating the fourth-seeded pair from St. Paul’s (6-2, 6-2) and following that up with another straight set win, this time over East Ascension. But Catholic’s Line 2 team ended the improbable run on Day One’s final match in a hard fought, closer-than-the-score indicated 6-3, 6-3 quarterfinal battle played in front of a spirited crowd.

“I always tell our guys that the measure of a team is not whether they win, but whether they play to their potential,” said Smith. “And this group did that. We just ran into a better team.”