Rugby Brings State Title Back to Carrollton and Banks 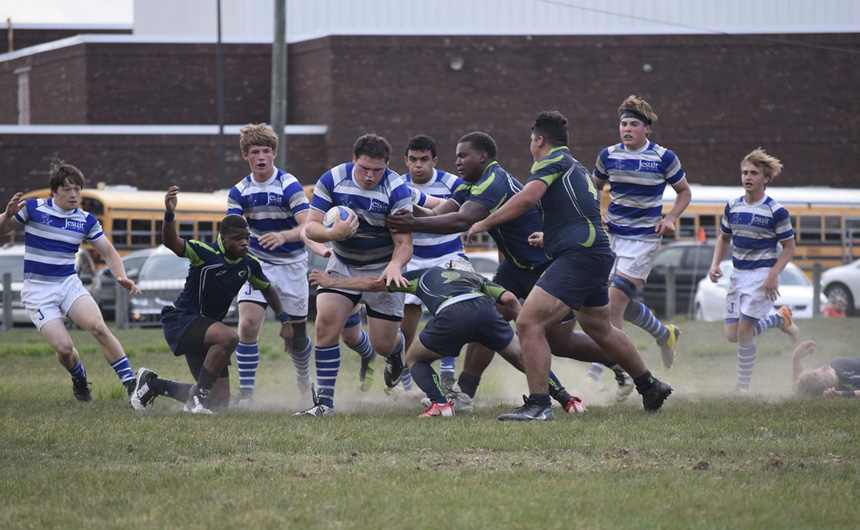 Peyton Cox smashes through the Bayou defense as his teammates are close behind.

Heading into Saturday night’s State Championship match against the defending champion Bayou Hurricanes, some things were certain. The state’s top two Rugby teams deserved to be there, the match would prove to be a tough physical battle, and neither team was going home without leaving everything they had on the pitch.

If you have been around the Jesuit Blue Jay Rugby program the past few years, it was certain that this year’s Rugby team was different, “Special” one could say. And they showed just that in a match in which they were down 17-0 at halftime, but mounted a tremendous comeback with a thrilling 25-22 victory in overtime. “Special”,  all season long.

The match started out with the Jays spending most of their time in their own territory, and Bayou dominating the action. The Jays faced a tough head wind as they were not able to render any clearing kicks. Bayou got on the board first using their patented tough physical play. It only took 7 minutes for the Hurricanes to punch it in the try zone off a penalty by the Jays. then a few minutes later, Bayou’s #3  revved up his 300 pound frame to motor on in making it 12-0, ‘Canes.

With about 15 minutes left in the half, the Hurricanes outside center sped down the middle crushing the Blue Jay defenders crossing the try zone for the third time. One of the few bright spots for the Jays was that Bayou missed 2 conversions. That would come back to haunt them. 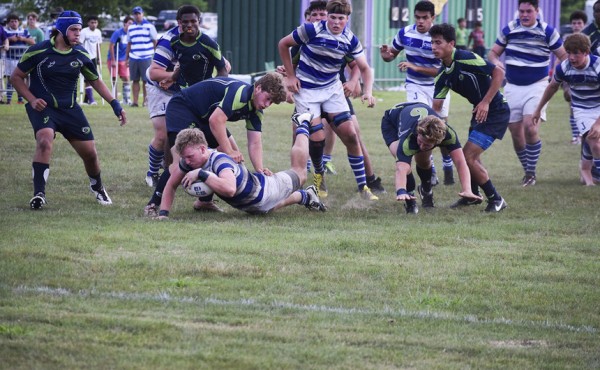 Junior Charles Lobrano dives in close to the try line.

Head Coach Adam Massey and his team of experienced coaches  encouraged the Jays to stick to the game plan and the second half seemed like a different story.

With about 10 minutes into the second half, coming off a Bayou penalty kick, senior Case Ellis weaved his way through the defense and into the try zone to get the Jays on the board. Conversion missed. 17-5, ‘Canes.

A few minutes later, with the Jays gaining momentum, Jesuit methodically moved down the pitch and it led to a centered penalty kick by senior fullback Jack Gab. 17-8. Massey’s talented coaching staff showed their prowess and starting subbing in some fresh legs at the forward positions. This would make a difference. The match was  getting interesting.

Just as the Jays started to feel the momentum shift, the Hurricanes, aided by some nifty passing managed to get outside and the ball into the hands of one of their speedy players. The 70 meter jaunt into the try zone was challenged by the Jays and left the conversion attempt from the corner, no good. Another missed conversion would prove critical. 22-8, ‘Canes.

The Jays would not be denied and with 9 minutes left in the match, junior Matthew Palmer unleashed one of his signature weaving long runs down the middle deep into Bayou territory. Junior Gabe Wax punished the tired Bayou defenders to get the Jays even deeper. Coming off a Jesuit scrum, senior Josh Cashio unleashed a laser to Gab who took it in for the try. Conversion was good and the Jays were in business down by 7 with minutes left. 22-15.

A yellow card on one of Bayou’s forwards putting him in the Sin-bin helped the Jays to mount their final and game tying drive. Being one man up, Jesuit applied continuous offense pressure moving down the pitch well knowing that they had to score and score quickly as the clock was not on their side. Aided by a few key downfield kicks, the Jays elected to use a full lineout and the worn down Hurricanes could not stop them. Big men Peyton Cox and Charles Lobrano inched their way towards the try line. Jesuit retained possession and off of some menacing rucks, Cashio was able to dive in for the try. Gab added the conversion and tied the score 22-22 with only a few seconds left on the clock. 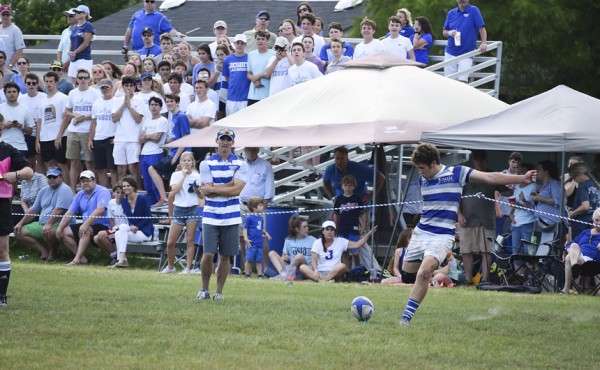 Jesuit won the toss and the 10 minute overtime began with the Jays being the aggressor. Lobrano hauled in the restart kick and charged down the pitch gaining big meters. Palmer took off down the middle and was cut down short of the try zone. After some back and forth possessions. Sophomore Langston Goldenberg poached the Bayou lineout keeping Jesuit deep into Bayou territory. After several key penalties on the Hurricanes, Jesuit had possession about 20 meters out. Time was ticking away with less than a minute left. Jesuit went for the kick. Gab, unphased by the pressure nailed it through the uprights, putting an exclamation on the 25-22 come from behind victory. “Special” indeed.

Massey praised the Bayou Hurricanes for their brand of smash-mouth, “tackle me if you can” rugby. “The Hurricanes are impossible to stop. They will score against you. And their physicality makes it tough to return the favor. They beat other teams by an average of 70 points all season. Despite this, our boys believed in themselves, and simply played with a steady, calm, confidence—sangfroid, in a word—throughout the match. Their trust in our systems and game plan paid off.”

Jack Gab was awarded the championship’s most valuable player. He personally accounted for 15 of Jesuit’s points (10 off his boot). Josh Cashio, Jesuit’s halfback, was awarded MVP runner up.